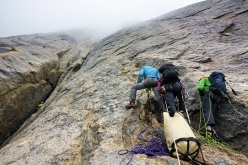 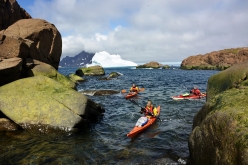 Sea kayak approach, before making the first ascent of Metrophobia up the West Face of Apostel Tommelfinger in Greenland
Photo by archive Silvan Schüpbach 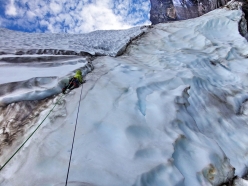 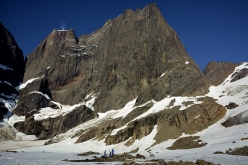 Silvan Schüpbach, Christian Ledergerber, Fabio Lupo, Jérôme Sullivan and Antoine Moineville have made the first ascent of Metrophobia (ice 120°, A2+, 7a), a 1700m new big wall climb on Apostel Tommelfinger in Southern Greenland. The new route is believed to be the first up the West Face of the 2315m high mountain.

An international team composed of Swiss alpinists Silvan Schüpbach, Christian Ledergerber and Fabio Lupo and Frenchmen Jérôme Sullivan and Antoine Moineville has made a remarkable ascent up the West Face of Apostel Tommelfinger above the Lindenows Fjord at Cape Farewell in Southern Greenland.

Apostel Tommelfinger - or Apostle’s Thumb - was first ascended in July 1975 via the 1,600m South Pillar by the French climbers Maurice Barrard, Pierre Henri Feuillet, Dominique Marchai, Georges Narbaud, Yves Payrau, Michel Pellé and Gérard Vellay. Obviously since then the peak has received attention from various other parties but according to all recent research, no one seems to have concentrated on the West Face.

A photograph Schüpbach took last year while climbing Ulamertorsuaq revealed the top 300m of this face, nothing more, but this was ample to motivate the five alpinists to travel to Aapilatoq and launch themselves into the unknown.

In 2014 Schüpbach and Ledergerber had climbed Shark’s Tooth in Greenland by fair means together with Italy's Matteo Della Bordella, reaching the mountain by kayak and this year they adopted the same approach. The five alpinists left Aapilatoq in their sea kayaks on the 21st of July and spent the next seven days battling against the raw power of the arctic ocean. The climbers reached the base of the face on the 27th of July and after just a day of rest and with a marginal weather forecast they started climbing on the 29th of July.

They safely avoided the first 300 meters by skirting around to the right, and then launched up the most stable-looking serac. Getting onto the first hanging glacier pushed them to their limits though: not expecting to climb any significant ice, they had only brought four ice screws, and the 120m section of ice proved rotten, at times even severely overhanging. They reached the base of the face that evening, relieved to finally be out of the line of falling rock and ice.

The next six days were spent climbing the West Face. 200m of rope were fixed as they made their way past three bivouac sites and a long, sustained series of chimneys and offwidths that let to the summit on 3 August. During the retreat it started snowing and they soon realized how lucky they had been with the weather, as snow quickly plastered the face. They continued abseiling the next day off slings, nuts, pegs and a bolt - the only one they placed on the entire route - and then dispatched with the looming serac as quickly as possible by abandoning their 100m static rope.

Although they had now reached Base Camp, the adventure was far from over since they still needed to return by sea kayak. After two rest days they put on their dry suits and started paddling back to Aapilatooq. Conditions proved challenging once again, so much so that one team member capsized three times and reached the shore thanks to the help of this teammates, extremely cold but happy.

The five alpinists safely reached Aapilatooq on the 13th of August. Commenting after the adventure, Schüpbach concluded: "This expedition is devoted to true wilderness and adventure which can be found when leaving behind whats unnecessary."