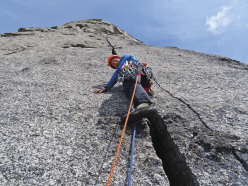 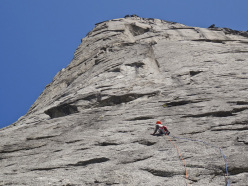 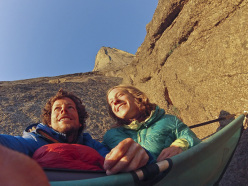 Over a ten-day period in July 2015 Silvan Schüpbach and Bernadette Zak attempted to make the first free ascent of the 1200m high Piteraq up Ulamertorsuaq in Greenland. Except for a 3m pendulum on pitch 22, the swiss alpinists climbed everything free with difficulties up 7c, R, X.

After The Mirror Wall in 2012 and Shark’s Tooth in 2014, Swiss climber Silvan Schüpbach returned to Greenland this summer, this time with his partner Bernadette Zak to attempt to free the 1200m Piteraq route on Ulamertorsuaq, in the Tasermiut Fjord close to Nanortalik. Established in 2008 by a Norwegian - Danish team between the routes War and Poetry and Moby Dick, the route had not been repeated previously. The Swiss duo managed to climb everything free up “The Large Cylinder” as it is known in locally, apart from a blank 3m section in the middle of the headwall.


Bringing the spirit of free climbing to the 1200m sheer west face of the remote Ulamertorsuaq in Greenland was the goal of this two-person-expedition. Silvan Schüpbach and Bernadette Zak, both from swiss city Thun, tried hard to free a never repeated and poorly protected big wall aid route. After 10 days on the wall during two attempts, the couple managed to climb to the summit, struggling with high difficulties and dangerous runouts.

Delayed Start
After their arrival in Nanortalik on July 2, the climbers were informed that the ship with their gear,would not arrive before July 6. This basically resulted in a one-week delay to the already tightly scheduled expedition.

On the day after Base Camp was reached, on 7 July, they two Swiss alpinists started to climb. The first 500m of the route Piteraq are poorly protected and include many obligatory and dangerous runouts on spaced bolts and gear. On 9 July the climbers reached the so called heart where the wall steepens up. Hard and steep climbing up an exposed pillar led the Swiss climbers to a portaledge bivy, 6 pitches from the top of the pillar. But the next morning, on 10 July 10, it snowed, the wall got wet and the climbers didn’t have enough food and water to sit it out and wait for better weather. They were forced to retreat.

Second Attempt
As the last part of the route Piteraq shares the more famous War and Poetry, the climbers decided to climb this route to the summit and attempt the remaining pitches of Piteraq by abseiling in from the top. From 15 - 18 July 15 they climbed War and Poetry to the top, with Schüpbach onsighting all hard pitches (up to 7c). On 19 July the climbers started to freeclimb the remaining pitches of Piteraq. On one of the hardest pitches, the original line went up a blank wall with bathooks. Despite finding a natural feature that could be climbed free a 3m blank traverse making it impossible to free climb the entire pitch. With time and energies running out, the two were forced to resorting to making a pendulum at this point before continuing to the summit. The entire free ascent remains a future challenge.

Future perspectives
The remaining days in Greenland were spent exploring many of the other Fjords in the area in a small zodiac boat. It seemed to the Swiss there there is still a big potential for new routes on good rock.