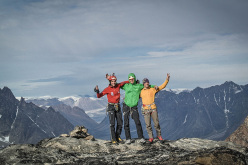 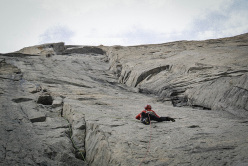 Matteo Della Bordella running it out to reach the series of cracks.
Photo by Silvan Schüpbach 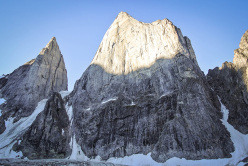 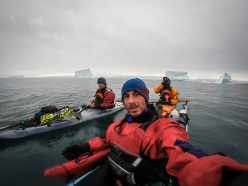 Shark's Tooth in Greenland by fair means, the report by Matteo Della Bordella

The report by Matteo Della Bordella about the first ascent of The Great Shark Hunt (900m, 7b+), the new route up Shark's Tooth in Greenland established onsight and in a single push in August 2014 together with Silvan Schüpbach and Christian Ledergerber. A great adventure that involved kayaks (to paddle to and from the mountain), total isolation, superb climbing and a close encounter with a polar bear.

Kayaking and climbing. An interesting combination. The sort of adventure that's always fascinated me. A decade ago I read a book by Stefan Glowacz that talked about his "by fair means" approach to expeditions in remote places such as Greenland, Baffin Island and Canada. Expeditions of this sort, the idea of reaching a peak that has never been climbed before, had always been a dream of mine and I'd often wondered if one day I'd ever manage to go on one.

In truth, the dream wasn't necessarily about combining kayaking and climbing, the dream was about going to some unexplored place, ascending a beautiful, unclimbed face and experience an adventure that went well beyond the mere alpine undertaking.

As often happens, the opportunity arose almost by chance: Silvan Schüpbach and Christian Ledergerber (Laddy) had been to the Renland peninsula two years ago to climb the impressive Mirror Wall and on their return they saw and photographed the NE Face of Shark's Tooth. Although this peak had already been climbed in 2011 by the Russians Alexander Ruchkin and Mikhail Mikhaylov via the North Ridge, the main face was still untouched. So Silvan and Laddy decided to return and I'll never thank them enough for having asked me to join them on this project.

Before setting off I knew I had an almost unique opportunity, a gift, a rare privilege. What lay in store was a fantastic face, 900 m of perfect granite, still virgin in 2014, set in the wild and uncontaminated Scoresby Sund fjord and the Renland peninsula. We knew these were two elements that are difficult to come by. We wanted to make the most of this great occasion and we wanted to do so by adopting a style that was as clean as possible and that would allow us to tackle the face, and its surroundings, on equal terms.

This led to our "by fair means" approach and the idea of using a kayak. For those who don't already know it, kayaks were invented by the Inuit people and the first kayaks used animal skins stretched over wooden frames, and in the native Inuit language kayak literally means “man's boat”. But apart from this anthropological detail, for all of us the kayak approach posed an important question mark. None of us had ever used a kayak before and there's no hiding the fact that getting into a kayak for the first time, just 4 months prior to the start of the expedition, was a pretty big challenge since I put myself to the test in something that for me (and for the others for that matter) was decidedly distant from our “comfort zone.”

Ittoqqotoormiit, the unpronounceable village and home to 400 people, is the last human settlement on Greenland's east coast. In truth, the entire east coast is completely wild and sparsely inhabited, the closest village is located 1200 km away and the sea remains frozen for about 9 months a year. It's a remote and inhospitable place on all accounts, considered "out of bounds" even by the Inuit themselves who told us that the western part of Greenland is far richer, active and inhabited and that no one wants to live down here on the east coast.

We set off from Ittoqqotoormiit on 6 August and after having paddled for 7 days and circa 210 km past beautiful, at times disturbing, icebergs and seals we finally reached the Renland peninsula. But even though the kayaks added a little extra to this expedition, it was the Shark Tooth that provided us with the greatest satisfaction, simply because I'd never stood below such an immense face with the chance to choose our own line. We all agreed that our goal would be to try and free climb a line up the centre of this impressive vertical and overhanging face.

In the end we needed three days to climb our route. After the initial, at times dirty slabs we immediately delved into the heart of the route; the rock wasn't totally solid since the overhanging face meant that the wall never got wet, but we always believed in our line and slowly but shortly made our way through the overhangs, slabs and cracks. On several occasions I thought we'd be forced to resort to aid due to the quantity of the rock or the apparently smooth sections between the cracks, but with a bit of courage perseverance and luck we always managed to find a way upwards, climbing free all the time, none of us ever taking a fall.

On the evening of day two, having passed the biggest difficulties, we stumbled across a spectacular place to bivy: a niche similar to that on via Attraverso il pesce on Marmolada, in the Dolomites. Actually it was slightly less comfortable, but with our portaledges this wasn't a problem. On day three the rock improved considerably and we followed a series of cracks and corners to the summit.

We had all the time in the world to enjoy this fantastic moment. Just the three of us, alone in this immense valley, at the top of the mountain of our dreams. In retrospect, the nature of the route, the difficulties and length make it very similar to the famous Attraverso il pesce, even if the climbing style is completely different and the rock is less compact. Thanks to the fact that we descended via the Russian route we managed to leave very little in-situ gear, just 2 bolts: one that allowed the seconds to make the travers eto the second bivy, and the other in the niche for the portaledge. I like to think that those who follow in our footsteps will still have the opportunity to tackle this face practically on the same equal terms as we did.

The sheer potential for new routes in this valley is unbelievable and there are countless virgin faces and peaks. After having climbed Shark's Tooth, the main aim of the expedition, we gave in to temptation and climbed another two routes, despite knowing full-well that the return journey via kayak would be long and tiring. The new routes we climbed were Oasis and the “Normal” route up what is possibly the most beautiful mountain in the area that we subsequently called "Daderbrum".

After these ascents the time came for us to return. Although are kayaks were far lighter than before and therefore far faster, the weather slowed us down with strong winds and rain.

We spent the last night in an abandoned building circa 25 km from Ittoqqotoormiit and just when we thought it was all over, we were greeted by a final surprise. At about 5:00 am Laddy heard a noise; despite still being groggy, it only took him a few seconds to realise that there was a polar bear outside! Trapped inside his sleeping bag Laddy started to scream. In the meantime the bear opened the two doors we'd left ajar and entered our room and stood circa 1.5 metres from Laddy, 2 metres from me, and in a fraction of a second I switched from deepest slumber to being hyperactively awake. We made as much noise as possible to scare off the bear, I threw a table onto the floor and Silvan arrived to give us a hand. Fortunately our desperate efforts were successful and the bear turned around and left the hut with a grunt.

Poor bear, that we called Berta, we certainly didn't make her feel at home! And to think that she'd even shown her best manners and knocked on the door before coming in...

For me this was the most original expedition, the biggest and most complete adventure since I've started climbing in the Greater Ranges... all things considered, even in 2014 it's still possible to find a bit of space to explore and climb something new!