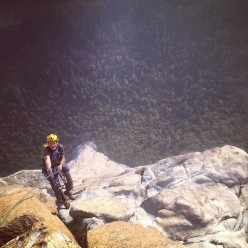 Usually the name Alex Honnold conjures up images of amazing free solos, hundreds of meters off the ground. Although it is true that these ascents carried out by the American attract huge media attention, in actual fact most of Honnold's climbing is done tied securely to a harness and rope. And it comes as no great surprise therefore that, aside from these bold solos high above Yosemite Valley, Honnold happens to be ticking the El Capitan free climbs one by one. Thanks to his latest vertical escapade, he has now brought his tally of free big walls to seven.

The most recent ascents up this smooth granite monolith were made a few days ago with his friend Josh McCoy when the two repeated the Muir Wall via the Shaft variation and, a few days before, a 5 pitch variation called PreMuir.

Muir Wall is a stunning route that winds its way between The Nose and the heart formation immediately to the left for almost 1000m, first climbed in 1965 by Yvon Chouinard and TM Herbert in great style: just the two of them ventured into the huge unknown above them, no fixed ropes, difficulties up to A2. In 1994 Kurt Smith, Scott Cosgrove and Greg Epperson discovered the Shaft variation that would finally unlock the key to the first free ascent, but they were blocked by a tiny section that was eventually freed in 2001 by Tommy Caldwell and Nick Sagar. Graded 8a +, the Shaft variation of the Muir Wall had been repeated only once previously, by the Germans Tobias Wolf and Thomas Hering this summer, probably due to a dangerous flake on route. Honnold repeated the line in 12 hours and without falling in what he himself has described as "one of my best days of climbing ever!" This success came about thanks also to their repeat, a few days earlier, of the the difficult PreMuir 5.13c/d variation which shares most of the same climbing. First freed in 2007 by Rob Miller and Justen Sjong, the PreMuir was repeated by Honnold and McCoy over a four day period.