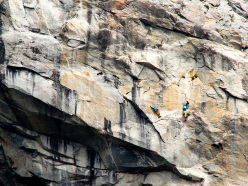 Tobias Wolf and Thomas Hering are currently in Yosemite where in just a fortnight they succeeded in climbing two difficult, rarely repeated routes up El Capitan. The two German climbers first set their sights on the The Shaft, an 8-pitch free variation to the magnificent Muir Wall, famous for being one of the most beautiful natural lines up El Cap. Kurt Smith and Scott Cosgrove had attempted to find a free version back in 1994 and while the two Americans had managed to climb all but 2 metres without the use of aid, the first free ascent had to wait until 2001 when Tommy Caldwell and Nick Sagar unlocked the sequence with difficulties up to 5.13c (8a+).

Wolf and Hering climbed the Muirblast start to the Heart Ledges on day 1 and then, after a days rest, ascended their fixed ropes to reach their highpoint before spending a further 6 days repeating the route. While the technical crux towards the end of the route required "more than 100%" according to Wolf, it was the infamous dangerously loose flake that proved the psychological crux and probably the real reason why this route is not known to have been repeated until now.

A day after this success, Wolf and Hering turned their attention to El Nino, the free version to North America Wall first identified and climbed by Alexander Huber and Thomas Huber in 1998. Wolf had attempted this route back in 1999 but, on his first visit to the valley, he realised that the climbing up the rough cracks and smooth granite faces can require considerable readjustment (after redpointing 5.14a / 8b+ at Smith Rocks he struggled up 5.12b / 7b cracks in Yosemite) and it was only this year that he returned with this route in mind. Wolf and Hering spent a total of 5 days repeating the 30 pitch 5.13d and theirs, supported by the DAV (German Alpine Club) is likely to be only the 8th ascent.