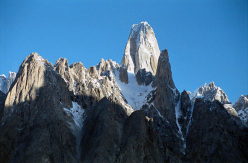 Matteo Della Bordella, Luca Schiera and Silvan Schüpbach have safely reached Base Camp after having forged a new route up the West Face of Uli Biaho (6109m), Trango, Pakistan.

News flash: the two Italian Ragni di Lecco alpinists Matteo Della Bordella and Luca Schiera as well as Switzerland's Silvan Schüpbach have safely reached Base Camp after having established a new route up the difficult and "lost" West Face of Uli Biaho in the Trango Towers group in Pakistan.

A few days ago the trio had attempted a line to the left of the South Arete first climbed in 1988 by Maurizio Giordani, Rosanna Manfrini, Maurizio Venzo and Kurt Walde but after having climbed for two days alpine style they were forced to abandon their attempt due to bad weather. After a short rest the trio set off once again, negotiating the difficult approach which climbs past sections of delicate and demanding ice up to 75°.

Last night, at circa 18:00 local time, Matteo Della Bordella announced they had successfully reached the summit. Calling via satellite phone from the base of the mountain he had stated "We've completed the route and we're getting ready for the bivy. We'll stay at the base tonight since we prefer to tackle the approach gully tomorrow morning, when we've regained some energy." A few minutes ago they safely reached Base Camp where they were met by the other expedition member Davide Bacci.

All ascent details are currently missing but Fabio Palma, the President of the Ragni di Lecco mountaineering club, has sent us the following brief report. Apart from explaining the characteristics of this great peak, his writing is above all a sort of "liberation" from that anxiety which overcomes all those who sit and wait patiently at home... In due course we will find out more about the ascent, also because prior to this climb there were no detailed photos of the West Face. In the meantime the mission has come to an end in the best of all possible ways, and this is good cause for celebration!

It's certainly a big route because it's impossible not to achieve something big on that Tower. Teo (Matteo della Bordella) had really been taken in by the story of the 1979 first ascent by the Americans, a legendary and epic climb that rates as one of the most beautiful all-time ascents at altitude.

Two years ago Teo wanted to try Eternal Flame, the year the Huber brothers free it, but he failed to find some climbing partners. Now there's Luca, together they form a great partnership and everything they do is motivated by formidable values, strict ethics and steadfast principles.

It is noteworthy that on a Tower like this one, the most difficult to get to in the Trango group, there are now 4 Italian routes. Having said that, Silvan is as strong as them on rock and a monster on mixed terrain and his contribution was certainly fundamental.

At this point it's worth remembering the route put up by Giordani and partners: one of the few big walls put up by Italians at altitude and justly put back into the spotlight by the recent climb. There are thousands of big walls just waiting to be climbed over there but in terms of beauty Uli Biaho is quite particular: it looks like a divine finger, a challenge to verticality. A peak that all alpinists dream about, of seeing close up. So climbing a virgin face alpine style must have been truly exciting.

They'll tell us about the technical details; the approach was very complicated and while they expected something similar to Eternal Flame, as of ABC things turned out to be very serious. In recent years the glaciers have really been changing appearance and approaching the base via mixed terrain is proving dangerous and complicated (the Ragni had already experienced this a few years ago at Riso Patron). This evolution of things is correct, techniques and gear improve but nature always calls the shots. Perhaps they'll have some regrets for the South East Face, the route climbed by the Americans as the initial plan had been to climb this with portaledges in Alpine Style, but if they abandoned it then it really must have been had to be really an unequal challenge. It takes a whole lot for Teo, Luca and Silvan to change projects!

There are always may thank yous to make, especially to the many fans who follow us, the many friends, mothers of these youngsters, especially to Saro Costa's mother, a really exquisite person. The stress we've accumulated following the dreams of Teo and Luke is huge, for many of us Ragni they are like children, and they know this, because one of their many qualities is gratitude which they display in many ways, as well as honesty. Their mountaineering is not motivated by a thirst for glory, they simplu want to climb the most beautiful and difficult things, those that are prohibitive. They guys are never satisfied, and putting in some hard work is a pleasure. Being with them is worth a thousand races, we want to continue to invest in youngsters and give others the chance to tie in with them, such as others in our group who couldn't make it this time due to work commitments."