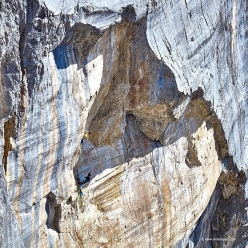 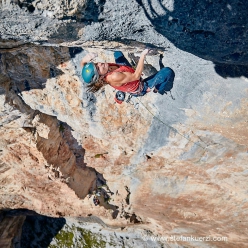 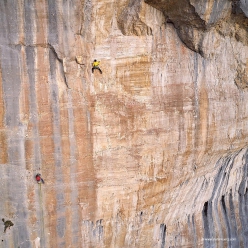 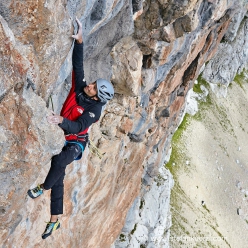 Summer climbing in the mountains resulted in three hard multipitches for Jacopo Larcher and Barbara Zangerl: Silbergeier and Headless Children in the Rätikon in Switzerland and Zeit zum Atmen up Rote Wand in Austria.

Even if snow has already made its first fleeting appearance up in the mountains and summer is abruptly coming to an end, Jacopo Larcher and Barbara Zangerl are still active on their difficult multi-pitch projects. In recent weeks they’ve clocked in three tough alpine outings: Silbergeier and Headless Children in Switzerland’s Rätikon and Zeit zum Atmen on the Rote Wand in Austria.

Silbergeier is, according to Larcher, "a milestone I’ve always wanted to climb." He tried it for two days in 2013 when Barbara Zangerl made the second female ascent of Beat Kammerlander's masterpiece after Nina Caprez. Earlier this year Larcher he returned to the IV Kirchlispitze for three days to support Siebe Vanhee in his attempts, then he redpointed all pitches belayed by young Nemuel Feurle.

Last week Larcher and Zangerl travelled to Rotwand in the Lechquellengebirge to try Zeit zum Atmen, a little-known multi-pitch outing freed by Pio Jutz in 2001 with sustained difficulties and two crux 8b pitches right the end. Zangerl and Larcher had tried the route once before 3 years back, and this year they returned for a day to get their bearings but, due to lack of time, they didn't work the last pitch particularly well. The next day they returned, planning to work the last crux and with low expectations therefore, but after swinging leads on the initial "easy" pitches - 7c, 8a, 8a+, 7c+ and 7c - they reached the last pitches having climbed all the lower section free. At this point things began in earnest and both managed to decipher and then lead the final two pitches,

The latest ascent dates back to Sunday when, after just a day of checking out the moves, they sent Headless Children in the Rätikon. Established on Schijenfluh by Marco Müller, Koni Mathis and Bruno Rüdisser between 1997 and 1999 and later freed by Mark Amann, this is another classic 8b alpine sports climb, repeated in the past by the likes of Kilian Fischhuber and Nina Caprez. As usual, Zangerl and Larcher swung leads on easy terrain and then both led the crux pitches.

Larcher told planetmountain.com "all these routes, despite being first ascended many years ago, still have their say. Silbergeier in particular isn’t easy, by no means, both technically and psychologically. It is one of those climbs that has always been on my wishlist. A monument to hardcore first ascent ethics!"