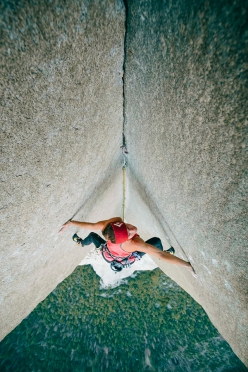 Barbara Zangerl edging her way up the spectacular Stemming Corner on the Pre-Muir Wall up El Capitan in Yosemite, together with Jacopo Larcher. 'One of the most aesthetic pitches I've ever seen!'
Photo by Jacopo Larcher 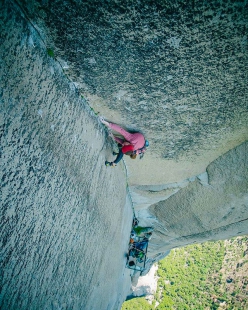 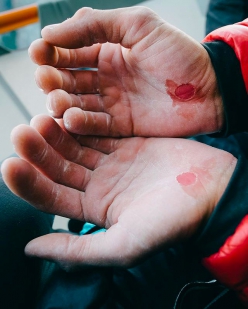 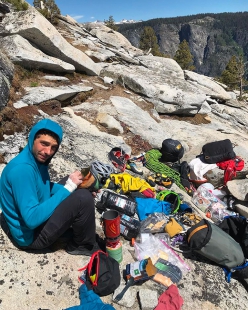 Austrian climber Barbara Zangerl accompanied by her partner Jacopo Larcher has completed a free ascent of the Pre-Muir Wall, a beautiful big wall up El Capitan in Yosemite.

"It's not The Nose but maybe even better." This is how Austrian climber Barbara Zangerl announced her free ascent of the Pre-Muir wall on El Capitan in Yosemite. This amazing big wall is a free variation to the famous Muir Wall established by Yvon Chouinard and TM Herbert, and freed by Rob Miller and Justen Sjong in 2007 by combing sections of Muir Wall with The Shaft, The Shield and virgin terrain. The 30-pitch outing weighs in at 5.13d and offers a spectacular stemming corner crux and a thin, endurance layback pitch close to the top.

Zangerl and Larcher got off to a slow start due to poor weather that initially forced them to leave the valley, and on their return they set their sights on The Nose after an autumn 2018 attempt. Unfortunately the crux pitches were wet and so they repeated the lesser-known Father Time, a difficult 20-pitch outing put up by Mikey Schäfer on Middle Cathedral, located directly opposite El Capitan.

After a few rest days the duo then opted for the Pre-Muir wall. As usual, Larcher and Zangerl swung leads on the easy pitches and then both led the more difficult ones. The start proved promising, with both onsighting or sending second go all the pitches on the lower half of the route. At the famous stemming corner though their team-free progress ground to a halt.

Larcher told planetmountain.com "I tried this pitch for a day and in the evening fell right at the end, tearing the skin on the palms of my hands. The next day I decided to abandon my free attempt so as not to slow Babsi down." The duo continued, with Larcher supporting Zangerl’s free bid as much as possible. After 6.5 days they summited, with Zangerl thanking not only her climbing partner, but also Britain’s Hazel Findlay who had inspired her after her first repeat in 2012 with Neil Dyer and James McHaffie.

Zangerl has now free climbed four big walls on El Capitan, all obviously with Larcher: Magic Mushroom in 2017, Zodiac in 2016 and El Niño in 2015. An important detail worth highlighting: the two started up the Pre-Muir intent on making a ground-up, single push ascent, launching into the unknown with all the food and gear necessary for dealing with a big wall of this dimension and difficulties. Their "one single push" proved successful, one of the most beautiful big walls of all.

In other Yosemite news, Alex Honnold and Brad Gobright have repeated what is known as the Pineapple Express, ie the totally free variation to El Niño established by Sonnie Trotter in 2018. Honnold and Gobright set off at 4.00pm and summited shortly after dawn after "a brutal 14.5 hour ascent". Gobright then climbed Golden Gate all free in 16.5 hours. Nearby, The Nose was climbed by 10-year-old Selah Schneiter accompanied by her father Mike Schneiter and friend Mark Regier.