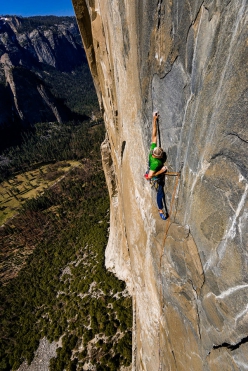 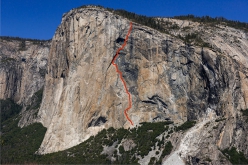 The line of North America Wall on El Capitan, Yosemite. First ascended in 1964 by four of the most influential climbers of valley’s Golden Age, Yvon Chouinard, Tom Frost, Chuck Pratt and Royal Robbins, the NA wall represented another important step forward in terms of ethics and style
Photo by archive

Climbing with Tommy Caldwell, on 19 November Sonnie Trotter made the first one day free ascent of a new all free variation to North America Wall / El Nino. The Canadian had discovered the 3-pitch variation, now called Pineapple Express, in 2017 with Alex Honnold.

North America Wall is one of the most historic routes on El Capitan in Yosemite. Established in 1964, it was the first climb up the huge SE Face of El Cap and only the third route on the big stone after The Nose and the Salathè. Forged by four of the most influential climbers of valley’s Golden Age, Yvon Chouinard, Tom Frost, Chuck Pratt and Royal Robbins shortly after the ground-breaking Salathè, North America Wall represented another important step forward in terms of ethics and style: after only two minor forays it was climbed in an impeccable ground-up single push from 22 - 31 October, for the first time without "umbilical cords", ie fixed ropes. The difficulties were such that it was hailed as one of the hardest climbs in the world for that era and the commitment required to probe into the unknown prompted Robbins later to describe it as "the climb of our lives. More difficult and more serious than anything we knew. It all came together for us here."

The route was also the third climb to be freed on El Cap, when Germany’s Alexander and Thomas Huber spent three weeks in autumn 1998 weaving their way up a free variation they called El Niño. With its 800 meters of mercilessly steep granite, the brothers described this as one of the best climbs on the planet. Difficulties checked in at 5.13b, with one short rappel down a completely black eight-meter blank section used by all those who have repeated the route.

The wall has now been thrust into the limelight thanks to Canada’s Sonnie Trotter who in spring 2017 teamed up with Alex Honnold to discover a connecting link "that would allow the North American Wall to finally be free climbed in its entirety via a 3 pitch variation to El Niño 5.13c." The new variation avoids the rappel completely by taking "a more direct line into the black dihedrals, straight up on beautiful rock, then left for two pitches to meet up with the upper dihedral." Trotter told planetmountain.com "It was a major pain in the ass to find and to equip because it’s right in the middle of the 2700 foot wall. Gaining access was the biggest crux."

Unfortunately time ran out that season for the free ascent and due to commitments Trotter and Honnold failed to team up again, so this fall after adding a few protection bolts Trotter joined forces with none other than Tommy Caldwell to pull off the first one day free ascent. The new variation is called Pineapple Express and the entire route was climbed free in an impressive 13 hour push on 19 November, with the new pitches 12, 13 and 14 checking in with similar difficulties to El Niño. Time will tell which version will become the future standard.

I first met @alexhonnold in the fall of ‘07 around a crackling fire in Camp 4. Under his trademark hoodie I could still make out the intensity behind his eyes and wide grin, he was perhaps just 21 and recently made headlines for soloing Astroman and the Rostrum in a single day. Something I knew I would never even attempt. Honnold humbly insisted that anybody who climbs 5.13 could probably do it. But not anybody can solo. It takes something more. A certain state of mind. Regardless of age, Alex is a hero, we have fun, I learn something when I climb with him and I’m always grateful to be pushed a little from my comfort zone. In the Spring of 2017 we found the connecting link that would allow the North American Wall to finally be free climbed in its entirety via a 3 pitch variation to El Niño 5.13c. We joked that our recon mission was “5.11d R rappelling”. Scary, but only “moderately” dangerous:) When Alex is on rock, he becomes superhuman, and can do (almost) anything he wants uninterrupted by fear or exposure. I on the other hand move a little slower, more carefully and feel somewhat cautious next to his long strides on the mountain. Sadly, this year Alex couldn’t make it back to Yosemite like we had planned, and encouraged me to go for the climb with another partner. Naturally I was bummed, then gripped, thinking about some of the crux pitches, the fragile rock up higher or the long runouts over questionable gear. With two young kids in the back of my mind, I certainly wasn’t capable by myself. Or so I thought... Having superhero partners is great, but shouldn’t keep us from chasing our dreams. Graciously, another El Cap legend @tommycaldwell offered to support me on his final day of climbing in the valley this year. It was the last good day before the first storm of the season. We met at 4:30am in the Meadow and began our day. I tried to harness a bit of the Honnold state of mind. Pitch by pitch, we moved up the wall, Tommy and I laughed a lot up there and everything seemed to click. We topped out just before 7pm. I’m so thankful for good times with great friends. The hours spent “toiling” on El Cap are some of my most treasured. photo: @austin_siadak

26.06.2016
Sonnie Trotter free climbs the Totem Pole Ewbank Route
The video of Sonnie Trotter climbing the Totem Pole in Tasmania via the Ewbank Route. Established by John Ewbank and Allan Keller with the use of aid in 1968, in 2009 Doug McConnell and Dean Rollins freed the individual pitches on separate days. Trotter’s ascent is the first free ascent in a single push.

16.08.2011
The Shining, new multi-pitch by Trotter and Caldwell
Sonnie Trotter and Tommy Caldwell have recently sent The Shining 5.13c/d at Mount Louie in Canada.