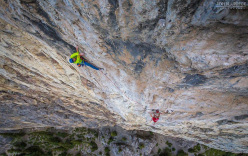 At the end of October Canadian rock climber Sonnie Trotter made the first free ascent of Blue Jeans Direct, a 8 pitch 5.14a on Mount Yamnuska in Canada.

Just before the onset of winter Sonnie Trotter managed to complete the first ascent of Blue Jeans Direct, an 8 pitch outing on Mount Yamnuska in the Canadian Rockies. According to Trotter, Blue Jeans Direct climbs 85% of Blue Jeans, a route bolted by Nick Rochacewich in the late 2000’s and freed by Derek Galloway at 5.13b in 2010. This line avoided the steepest bulges on pitch 5 however, and the obvious challenge was taken up by Trotter who spent several weeks working the line prior to his successful redpoint on 22 October together with Gery Unterasinger.

Blue Jeans Direct is the first 5.14a (8b+) on Mount Yamnuska and joins Trotter’s long list of difficult climbs in Canada that includes Family Man at Skaha Bluffs, 1975 on Little Goat Mountain, The Path at Lake Louise, The Shining at Mount Louie and, probably the most famous of all, Cobra Crack at the Cirque of the Uncrackables, Squamish.