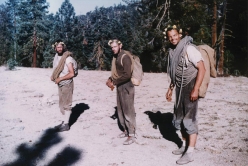 On 24 August 2018 American climber Tom Frost died aged 81. Frost was one of the pioneering climbers and photographers during the Golden Age of Yosemite climbing.
Photo by Flatlander Films

On 24 August 2018 American climber Tom Frost died aged 81. Frost was one of the pioneering climbers and photographers during the Golden Age of Yosemite climbing.

America’s visionary climber Tom Frost has passed away aged 81. Born in 1937 in Hollywood, Frost graduated from Stanford University in 1958, the same year he first visited Yosemite Valley; the huge unclimbed granite big walls would prove formative to Frost’s personal evolution as he, along with the likes of Royal Robbins, Chuck Pratt and Yvon Chouinard, soon came to embody the golden age of Yosemite climbing.

In 1960 Frost set the bar extremely high by making the first repeat of The Nose in just 7 days along with Joe Fitschen, Chuck Pratt and with one of his main climbing partners Royal Robbins, while in 1961 he raised the bar even higher with his ground-breaking first ascent of the Salathé Wall. Setting the standard for future generations, Frost, Pratt and Robbins forged El Capitan’s second route over nine and a half days, with ropes fixed on only the lower third before launching into the huge unknown for the next six days. Notably, the trio placed a mere 13 expansion bolts, in response to the 125 used during the 47-day first ascent of The Nose carried out by Warren Harding, Wayne Merry and George Whitmore between 1957 and 1958. The impeccable style of ascent of the Salathé Wall signalled the end to the era of siege climbing and is rightly considered one of Frost’s masterpieces and an all-time monument to free climbing.

Three years later Frost teamed up with Robbins and Pratt once again, as well as another of his main climbing influences Yvon Chouinard, to make yet another revolutionary first ascent, North America Wall on El Capitan. From 22 - 31 October 1964 the four weaved their way up El Cap’s southeast face, creating one of the most difficult routes in the world for that era in, remarkably, a single push. Frost was much more than just Yosemite though and he travelled extensively, leaving his few traces in Canada, the Alps and Himalaya. Standout ascents include the Hidden Pillar of Freney in the Mont Blanc massif in 1963, the first ascent of Mount Kangtega in the Himalaya with Edmund Hillary that same year, Lotus Flower Tower in Canada's Cirque of the Unclimbables in 1968 and a formidable effort during the succesful first ascent of the South Face of Annapurna in 1970.

Frost’s contributions to climbing were not limited to his actual routes however. In the late ’90’s for example he played an instrumental role in saving Yosemite’s historic climber’s campsite Camp 4, although he will probably be remembered by most for his plethora of iconic black and white Leica-shot photographs that document those vibrant early days of Yosemite pioneering. Frost also partnered his engineering skills with those of Yvon Chouinard to help invent fundamental new climbing gear such as RURPS and Hexentrics.

Arguably though, Frost’s advocacy for clean ethics and style has been even more influential and far-reaching. He and Chouinard clarified their vision in the revolutionary essay “A word” that appeared in the famous 1972 Chouinard Catalog. Frost expanded these ideas further for the 2002 Innsbruck congress The Future of Mountain Sports, and in many respects those visionary thoughts in favour of clean climbing in particular and sustainability and environmentalism in general appear more pertinent and pressing today than they did when first written almost five decades ago. His motto, "How you do anything is how you do everything", will hopefully continue to inspire generations.

15.03.2017
Royal Robbins, goodbye to America's legendary climber
On 14 March 2017 American rock climbing pioneer Royal Robbins passed away. Aged 82, Robbins was one of the best American climbers during the ’60’s and ’70’s, the period known in "Golden Age"" of Yosemite Valley climbing. Robbins was a pioneer and advocate of clean climbing, i.e. without pegs and expansion bolts, and one of the most vocal proponents of the need to protect the rock and environment.