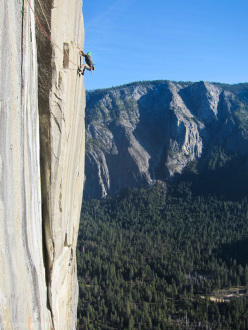 Sonnie Trotter has made the second ascent of The Prophet (5.13d R) on El Capitan, Yosemite.

After five weeks in Yosemite valley and five ground-up attempts, Canadian climber Sonnie Trotter has now made the second ascent of The Prophet, the 500m big wall first freed by British climber Leo Houlding in October 2010 and graded E8 7a, 5.13d R, 8b.

Trotter repeated the line together with fellow Canadian Will Stanhope and although they abseiled in to check out the upper pitches, they invested much time and energies this autumn climbing the dangerous lower pitches ground-up, a remarkable feat which required total commitment and which in many ways constitutes the real difficulties they affronted.

The duo then sent the line in a continuous push over 3 days, completing the final pitches in the light of their headlamps. Stanhope failed to redpoint only the famous A1 beauty pitch will no doubt return next season.

After the ascent Trotter commented "I think it was the most savage and satisfying rock climb of my life. One of the hardest routes I have ever done. My first El Cap route ever. And I’m glad it’s over."


Video of Leo Houlding on The Prophet, El Capitan by Posing Productions