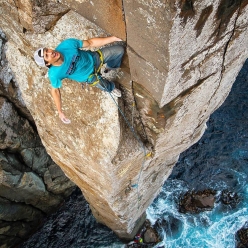 The video of Sonnie Trotter climbing the Totem Pole in Tasmania via the Ewbank Route. Established by John Ewbank and Allan Keller with the use of aid in 1968, in 2009 Doug McConnell and Dean Rollins freed the individual pitches on separate days. Trotter’s ascent is the first free ascent in a single push.

The Ewbank route on the Totem Pole in Tasmania, Australia has a curious history. John Ewbank and Allan Keller established the line in 1968 and in their bid to make the first ascent of this iconic rock pillar they resorted to the use of aid - a common practice at the time. In the ensuing years the route fell out of favour as most climbers chose to climb the more amenable Free Route, graded 25 and established in 1995 climbed by Simon Mentz and Steve Monks.

Thirty years passed without the Ewbank route seeing much traffic until in early 2009 two local climbers, Doug McConnel and Dean Rollins, restored the route’s importance after managing to free all the individual pitches. Despite their concerted nine-month effort, their success was partial though as they themselves were the first to point out: they had freed the individual pitches over separate days, and pitches 2 and 3 were separated by a hanging belay. In our post-climb report at the time, we wrote "Those aspiring to climb the line in a single push should be aware that the route takes fiddly gear, is run-out, and solid for the grade. Any takers?"

Well, the gauntlet had been thrown and last February Canada’s Sonnie Trotter and Will Stanhope accepted the challenge. After repeating the Free Route, Trotter quickly worked the moves of the Ewbank Route and then returned the next day to take things to their logical conclusion. The pitch is protected by a mix of bolts and trad gear and boasts 60m of 5.13b R climbing. Trotter travelled around the world specifically with this route in mind and told planetmountain.com "This ascent, though not cutting-edge, was nevertheless important for me, spiritually, because it's one of the most aesthetic routes I've ever seen. It was an honour to be the first to make its complete ascent."