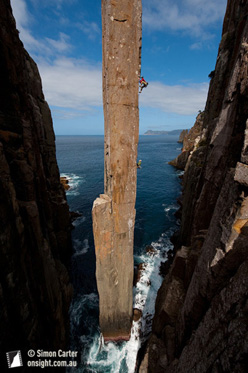 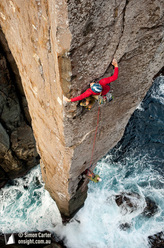 All individual pitches of the original climb up the Totem Pole in Tasmania, Australia, were freed in January by Doug McConnell and Dean Rollins.

News from downunder sometimes takes time to sicker through: in mid-Janaury the original route up one of Australia's most iconic rock pillars, the Totem Pole on the SE coast of Tasmania, was finally climbed free by Doug McConnell and Dean Rollins. In a massive nine-month effort the two local climbers freed all the pitches of the first route up this remote sea-stack, established with the use of aid by John Ewbank and Allan Keller in 1968.

The three pitch outing now goes free at grade 27, circa French 7c, and the two climbers were the first to point out that their style can still be greatly improved upon: they had freed the individual pitchs on seperate days and pitches two and three were split by a hanging belay. Those aspiring to climbing the line in a single push should be aware that the route takes fiddly trad, is run-out and solid for its grade. Any takers?


Totem Pole
The Totem Pole, also known as the Tote, is one of three dolerite sea stacks at Cape Hauy on the SE coast of Tasmania. It was first climbed in 1968 by John Ewbank and Allan Keller with the use of aid. The atmospheric pole was first climbed free via the aptly named Free Route, graded 25 and climbed by Simon Mentz and Steve Monks in 1995. The adventuous aspect of the Pole make climbing here all the more memorable: after a two hour hike climbers abseil to sea level, then swing out to the pillar to reach the belay ledge and start of the routes. At the top climbers return to mainland via a Tyrolean traverse using the abseil rope.
In 1998 British climber Paul Pritchard suffered a nigh fatal fall on the Pole and His story is told in the highly recommended award winning "The Totem Pole and a Whole New Adventure".