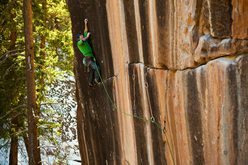 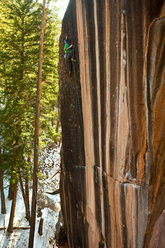 Sonnie Trotter from Canada has made the first retro-trad ascent of Prosthetics 5.13d (r/x) at Mill Creek, Utah, USA.

Thirty year old Sonnie Trotter from Canada recently travelled to Mill Creek in Utah where he carried out the first trad ascent of Prosthetics 5.13d (r/x), defining it as "one of the finest single pitch free climbs I've ever done for the grade. The final run-out is long and falling from the top would be bad news!" The 90 foot route takes a striking crack feature across an otherwise blank wall only to gain a ladder of tiny crimps to the top of the cliff and had been first climbed with the use of bolts in the mid '90's by local hardman Noah Bigwood.

Prosthetics lay dormant for almost a decade until Trotter carried out the second ascent in 2006 (the same year as his masterpiece, Cobra Crack at the Cirque of the Uncrackables, Squamish), and circa six months later fellow American Tommy Caldwell bagged the second ascent. It was Caldwell who envisioned shunning the bolts altogether and opting for a clean trad ascent, but he never returned leaving Trotter to finish off the business.

Trotter attempted the route three times prior to his successful trad lead in acrtic cold conditions. After the ascent he commented: "When I climbed Prosthetics on bolts 3 years ago, I broke a hold on the headwall and took a very unexpected fall, if that were to happen on gear, you’d wind up breaking a leg, or worse. Hitting the ground is definitely a very real possibility. It’s encouraged not to fall."

When asked why he chose to climb this route in this style he replied "I just couldn’t get it out of my mind. For three years I wanted to feel what it might be like to run out that headwall. It’s nothing more than a party trick really, it’s just for fun, I don’t really care if anyone else repeats it, or if they think it’s silly, to me, it’s one of the most exhilarating things I could think of, and it just felt really cool to do. I’m super happy I did it, but honestly, there’s really no reason why, maybe just to sharpen my teeth a bit."

Sonnie Trotter has been making a name for himself with hard trad ascents of bolt routes like Prosthetics. In 2004 he succeeded in the first ground-up trad ascent of Alan Watt's classic 130ft East Face of Monkey Face (5.13d R) at Smith Rock, USA, while in 2007 he made a trad ascent of The Path 5.14 R at Lake Louise, Alberta, Canada. His view on the future of this sort of climb is as follows: "The next evolution is that someone will climb this route ground up, placing gear, and they’ll do it without much trouble, like it’s no big deal, because that’s what all this crap is about, climbing is supposed to evolve, it’s an art form, gear improves, gyms improve, rubber improves, it’s exciting to see where climbing can go."