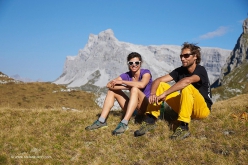 Swiss rock climber Nina Caprez has made the third free ascent of Headless children, the beautiful and difficult multi-pitch rock climb in the Rätikon massif in Switzerland.

Nina Caprez has returned to one of her favourite stomping grounds, the Rätikon massif in Switzerland where she has pulled off the third ascent of Headless children. Established two decades ago by Marco Müller, Koni Mathis and Bruno Rüdisser and then freed by Mark Amann, this 260 meter multi-pitch sports climb dropped off the radar until 2016, when Austria’s Kilian Fischhuber made the second free ascent and confirmed both its beauty and 8b difficulties.

Banking on her previous Rätikon experience, which has resulted in ascents such as Die Unendliche Geschichte with Barbara Zangerl, Hannibals Alptraum with Marc le Menestrel and Silbergeier with Cedric Lachat, Caprez touted with Headless Children for about four days last year and invested another three this month prior to the redpoint with Jonathan Crison.

In related news, earlier this summer Caprez travelled to Madagascar with France’s Mélissa Le Nevé, their sights set on Tough Enough high above the Tsaranoro Valley. While the route first climbed in a single day by Adam Ondra in 2010 proved a touch too tricky this time, if things go according to plan the Swiss-French duo will return next season to set the record straight.

Last Friday I made the third ascent of “headless children”. I started to work on the route a little bit last year, but got rained out. This time, weather and compagnie has been as it’s finest and I was lucky to stand at the top after a perfect ground up lead ascent. Thanks @michaschreiber and Jonathan Crison for the endless laughs in the route, to my family for the cheering, @kilifish for some helpful betas and @stefankuerzi for the brilliant photo session yesterday. #rätikonforever #lovelife #multipitch #headlesschildren @stefankuerzi @petzl_official @arcteryx @scarpaspa @praettigau.ch @sulzfluh

Spectacular view from the lip of the roof. Nina Caprez @ninacaprez climbs the crux pitch of “headless children”. She made the 3rd ascent which was also the ffa. Thanks for the great day out in one of the most beautiful places of Switzerland

14.08.2018
Tolerance by Nina Caprez
Swiss climber Nina Caprez talks about her recent trip to Lebanon where she joined up with the non-profit organisation ClimbAID to bring climbing to Syrian refugees and Lebanese youth affected by the war.