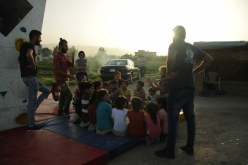 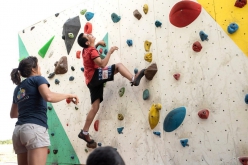 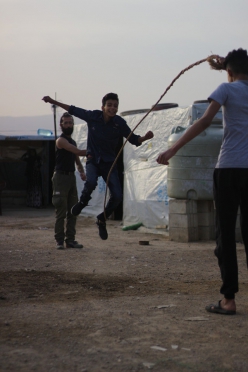 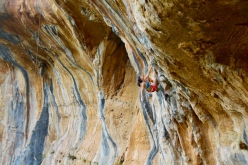 Swiss climber Nina Caprez talks about her recent trip to Lebanon where she joined up with the non-profit organisation ClimbAID to bring climbing to Syrian refugees and Lebanese youth affected by the war.

I’m standing in the sun, surrounded by well-dressed people. It’s my childhood friend’s marriage, in Switzerland. I’m watching people laugh; sip on a glass of tasty wine; kids are playing around. They are running on the green grass, climbing up trees and some are playing in the dirt. I close my eyes and images go through my mind from the place I was only a couple of hours ago.

My mind is switching back and forth between here and Lebanon. I can also see kids playing around there. Their attitude is the same and I realise how true those little human beings are.

As an adult, my last mission in the Middle East has been tough but very enriching. While bringing climbing to Syrian refugees and Lebanese youth affected by the war, together with the non-profit organisation ClimbAID, I realised once more the meaning of freedom and liberty.

I went to Lebanon for the second time as a volunteer to help ClimbAID. A year ago, Beat Baggenstos, the founder of the organisation, had the idea of building a mobile boulder to bring climbing to Syrian refugees and Lebanese youth.

Climbing is a powerful activity with plenty of facets. It shapes the values we share and defend: the sense of sharing, trying your best, dealing with fear and the overwhelming feeling of freedom while living fully the present moment.

When I arrived, we had to deal with a broken axle on the Rolling Rock and, resolving a problem in the Middle East is very different than in Switzerland. So the project was somehow hanging in the void and I was getting jittery. Just before I left, I was in great climbing shape from spending many month’s outdoors rock climbing. I think when I’m in that mode, my mind is not very open to seeing what’s going on in the real world. Spending time on rocks, focused on trying one’s hardest is not very relevant and it doesn’t resolve any problem on this planet.

Once the truck fixed and on the road again, we moved towards different refugee camps in the Beqaa valley. The beautiful feeling of bringing my own experiences from rock climbing here took over me.

I like to think that my climbing values are adaptable anywhere on this planet. I supported the team in teaching youth to climb harder, to climb together and to help each other. We encouraged Muslim girls to climb and to move (more or less) freely, to laugh, to cry, to show their vulnerabilities and to overcome them in a beautiful way. Climbing is simply great and I feel very fortunate to have the freedom to go out and share this activity all over the globe.

During one of the climbing sessions on the Rolling Rock, we asked a kid what it meant for him to climb on this colourful truck. He told us that before the war he had been used to climb in the mountains, but now there is no access anymore because of mine fields. And now he’s very happy to be able to climb a bit, even if it’s not in the mountains, because he really loves it.

That’s just one of the many stories that touched me. In those situations, (not far from the minefields) I see myself like in a movie but then I realize that it’s reality and I get covered in goosebumps. Honestly, when I’m living those moments, I can’t really explain what’s going on in my heart and head. I simply live them. Later comes the time needed to reflect and analyse.

Maybe these moments at the edge are making me who I am. I’m not reaching out to them, they just happen. I can’t control circumstances, but I can sign this contract with myself to be ready when things take a sharp turn. That’s the same in climbing and maybe that’s why I never panic or lose my mind.

Aside from our sessions on the Rolling Rock, I took time to explore the country and to go climbing in Tannourine, one of Lebanon’s best spot. It always takes time to switch from the Muslim rules (especially concerning clothing) into a Christian place like in Tannourine where you can climb in shorts and tank top. It had been very warm, 26 degrees in the shade, but I climbed pretty well, since it had also been very dry. It was very cool to redpoint Tannourine’s first 8b and to climb some other 8a’s. Lebanon’s climbing community takes the weekend and sometimes some days off during the week to go there. It’s always very enriching to talk with my friends, especially about the refugee situation.

If you think, Lebanon is only a 1/4 as big as Switzerland and has 6 mio people living there. 1/3 of them are refugees, which makes it the country with the highest concentration of refugees in the world.

Looking at those numbers does change the perspective from what the word “tolerance” might mean to us in Europe …. Despite being having so little space to share among so many, people somehow manage to live and work together in Lebanon. This year, ClimbAID’s base was a house in the middle of the Beqaa valley. Somewhere in Chtoura, surrounded by typical concrete buildings, colourful agriculture fields and by many refugee camps. Refugees live in sorts of huts, made of wood and tarp. Some seems quite sturdy, others much less so. Syrians are often employed by the local landowners. They work all day in the fields. But life somehow brings everyone together. As foreigner, you would not be able to tell apart who is who among the kids. They all love climbing, failing, getting better, and topping out. In the end, we’re all the same.

I am very thankful to Beat from ClimbAID who pushed me out of my comfort zone from time to time. To all the volunteers as well, who believe in the project and throw themselves in, heart and soul. I feel grateful to get to meet so many people who are willing to share their own experience of climbing with others. I also want to thank my partners and sponsors who support me on projects like Climb AID and give me the opportunity of becoming a better person.

16.03.2018
Nina Caprez and Barbara Zangerl climbing Die Unendliche Geschichte in Rätikon
The video of Nina Caprez and Barbara Zangerl and their 2015 repeat of the famous multi-pitch alpine sports climb Die Unendliche Geschichte in Rätikon, Switzerland. First ascended by Beat Kammerlander, the route had only been repeated once previously, by Pietro dal Prà in 2005.