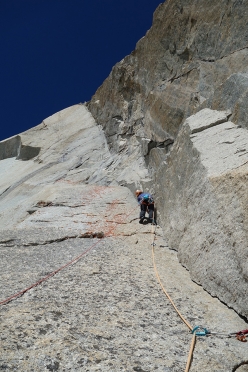 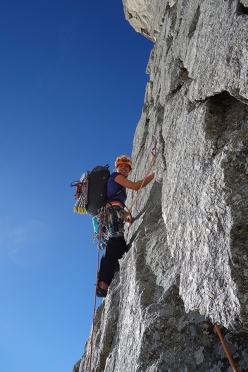 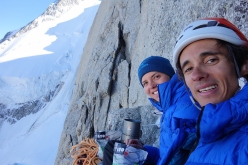 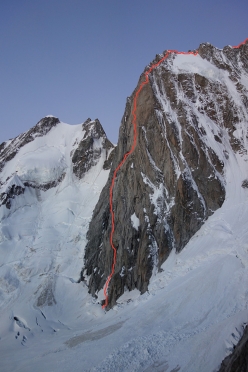 Swiss climber Nina Caprez reports about her July 2016 ascent, carried out with Merlin Benoit, of 'Divine Providence' (ED+, 7b+, 900m) up Grand Pilier d’Angle, Mont Blanc. This is likely to be the first free female ascent of this route established from 5 -8 July 1984 by Patrick Gabarrou and François Marsigny.

Over a period of four days in July 1984 Patrick Gabarrou and François Marsigny climbed what would become one of the absolute symbols of mountaineering, not only in the Mont Blanc massif: their Divine Providence up Pilier d’Angle. Originally graded ABO, the climb offered, offers, difficult and technical climb in a severe and remote setting, and even though more than three decades have passed, "Providence" remains coveted project for countless alpinists worldwide. First climbed free in 1990 by Alain Ghersen and Thierry Renault, and then first soloed later that winter by Jean-Christophe Lafaille, earlier this summer the line was repeated by Swisswoman Nina Caprez, more famous for cutting-edge sport climbing than alpinism at altitude. In this somewhat unusual vest as mountaineer, she describes her "magical" experience below. Which, for the record, could well be the route’s first free female ascent.

I am not quite sure what bit me when I did this route, but it must have been something magical. Sometimes it’s your guts that make you try things. This is the case for Divine Providence.

In July I spent some time in the mountains, climbing a pretty ridge, a nice summit like the Chardonnet, I didr some climbing at the Trident and the Grand Capucin, I sent Avé César on Petit Clocher du Portalet, and in general I built up some decent legs.

Well, I now felt ready and and so did my partner Merlin Benoit, whom I could trust with my life. With a three-day weather window followed by some storms, perhaps we started out a bit optimistic or even "culotés", yet from start to end it all rolled out nicely. Luck was on our side.

On the first day, we grabbed the last gondola from Rifugio Torino and crossed beneath Grand Capucin in silence, to then reach the Bivouac de la Fourche. We were alone, with a mind-blowing view: the Grand Pilier d’Angle unfolded before us. This 900 meter face is majestic, intimidating, and really makes you want to climb in it.

The mood between Benoit and myself was joyful. Divine Providence had been making the rounds in his mind for years. The wait was over now. We melted some snow and ate some LYO food, overcome with feelings of adventure. We fell asleep right away and woke up at 4am, the start awaited. We had something to eat, drank some tea. It was time to go!

After two little rappels we found ourselves on the Glacier de la Brenva which led us to Col Moore. The full moon illuminated the way ahead, but the day followed us quickly. Another five rappels landed us on the most dangerous part of the entire route: crossing below the large seracs. They were large and beautiful! We said a quick hello but then we picked up the pace to reduce the chances of them breaking on us.

We had observed the line carefully from afar and knew exactly at which point we wanted to start our assault of the wall. Crossing the Bergschrund at 7 in the morning is always going to be a tad sketchy. You see the gap under your feet, pray the snow bridge will hold, and then go! After a short committing climb with crampons, on past a small snow field, we were now finally at the bottom of the first pitch.

The first 400 meters of Divine Providence, up to the bivy, were a nightmare for previous parties because of the lousy rock. Benoit and I chose the FFME variation, a route established in 1992. Although the climbing is technically harder than the original, this option offers better rock. And while I’d initially been a bit scared of this first section, once on it I found myself at ease.

We started ascending the 5c to 6b pitches. Large packs were on our backs, yes, but the rock is solid and, to be honest, I even quite enjoyed it. I could picture myself with my bulky bag, following nice crack lines, setting up belays where suitable. Nevertheless we climbed with a very watchful eye, since there is still a fair bit of rock just asking to snapped off. But for people used to climbing in the Chartreuse, this is nothing new.

At 4pm we reached a small ledge. The bivouac at last. And this is not just any old bivy, it is the dream bivy. You find yourself 500 meters above the ground, perched among some of the most beautiful peaks in Europe! We felt elated ! What a joy to be there, living life fully, relieved that so far everything had gone so well.

We slept as well as two people can in one sleeping bag, and woke to a magnificent sunrise, extremely eager to start the meat of the climbing. On today’s menu, 10 pitches from 6b to 7b up impeccable granite. I can summarize the next eight hours in one word: dazzling…

I have rarely seen such beautiful cracks on concrete-solid rock, so easy to protect. I had a ball. We hauled our bags so that we could both climb freely and enjoy every last bit of it. Benoit, who didn’t quite manage to onsight all the pitches, still enjoyed the climb as fully as I did.

At 3 pm we reached the top of the rock face, now another 250 meters of mixed climb awaited. And… wow! That certainly shook us up We expected a nice ridge line, stretched rope perhaps, but no way. Instead there was a really loose rock scramble with plenty of ice. Benoit took the lead there. My partner is a solid mountaineer and here he showed me what he is capable of. He even saved my bacon when I started sliding off with a large boulder. Massive adrenaline shot through both ends of the rope. I quickly gathered myself and continue on.

At 7 pm we finally got to Arête de Peuterey. It’s a perfect snow ridge with a thousand meters of air on each side. We untied and completed the easy last stretch, following in the tracks of climbers who had exited the lntégrale de Peuterey earlier.

I was drained, yet savored each step, always finding good support for my ice axe. My heart was pounding hard, but out of joy and excitement. At 9 pm we congratulated each other on top of Mont Blanc. What a moment to remember! We had reached the famous summit by it’s hardest route and now it no longer looked that impossible.

Benoit and I make a perfect climbing partnership: the free climber with the mountaineer, two different approaches to climbing and a huge range of experiences to bank on in order to adapt to the many challenges that mountains have to offer.

I am really happy to have dared throwing myself at a classic mountaineering route. I am proud to have kept smiling throughout, and to be the first female to complete the ascent. I feel blessed to have shared it with Benoit. And although I am exhausted, I feel alive.