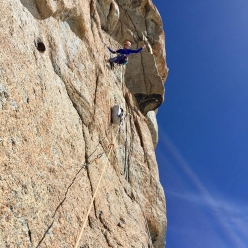 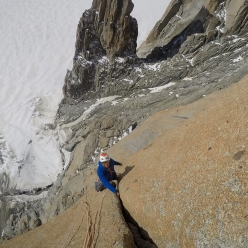 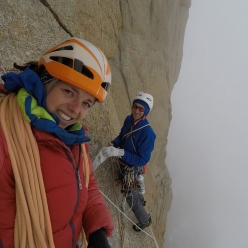 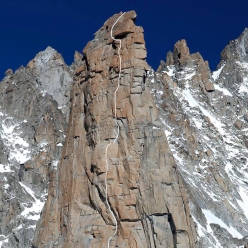 Over 4 days this summer France’s Arnaud Petit and Switzerland’s Nina Caprez made the first ascent of L'or du temps, a new route up the South Face of Grand Capucin, Mont Blanc massif.

20 years after his first ascent of the Voie Petit with Stéphanie Bodet, Arnaud Petit has now returned to the Grand Capucin to establish another new route. The Frenchman teamed up with Switzerland’s Nina Caprez to forge a 12 pitch line up the South Face with difficulties estimated up to 8a.

The new route shares the start of the Bonatti route, then breaks left after 2.5 pitches and continues independently and directly past steep, mainly overhanging climbing to practically right below the summit, where it joins what is believed to be the Ragni di Lecco route. The new route is called L'or du temps and is protected with trad gear wherever possibile along the cracks and corners. Nevertheless a total 27 bolts were placed along the pitches, and all belays are bolted. Some of these bolts were added after the first ascent in order to make the climbing less dangerous.

Speaking to planetmountain.com, Petit explained "We didn’t climb the entire route ground-up, we’d checked out the crux pitch in the center of the wall 2 weeks ago from above, as had it not been possibile to climb it free, then it wouldn’t have made any sense trying this new line. We climbed the top part ground up coming back to sleep on a ledge in l'Echo des alpages. Some other pitches below weren’t climbed ground-up either and I have no problem with this at all. Although I usually prefer to climb ground-up, sometimes trying something on toprope results in a better route. Good and minimum bolting is always better."

Once the rock is cleaned Petit believes the route may become a classic. He concluded "I feel blessed to have found this line - surprised to be as psyched as 20 years ago when I started another dream here, grateful to be fit enough despite my old bones and that Nina trust me and was curious enough to have a look."