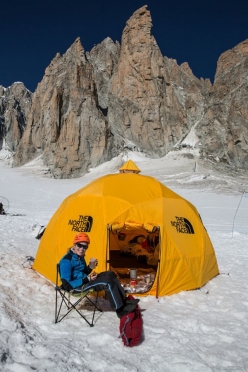 Vanessa François and her climb up Grand Capucin

In September 2015 Belgian alpinist Vanessa François ascended Grand Capucin along “L’écho des alpages”. While initially this may seem like nothing extraordinary, closer inspection reveals that in 2010 François became disabled as a result of an accident in the mountains and in order to climb the tower, she had to literally pull herself up, to within 3 pitches of the 3838m summit before descending to the bivouac. This three-day feat required incredible logistics in the Mont Blanc massif: ascending to that altitude, sleeping on the glacier, descending back down the route…

In order to achieve this dream - after having climbed Zodiac on El Capitan in Yosemite in 2013 and after having spent the night on the Grande Gendarme dell'Arête des Cosmiques in 2014 - excellent teamwork was needed. More than a team though, the climbers who helped François are a great group of friends that includes Liv Sansoz, Cédric Lachat, Fabien Dugit, Bertrand Delapierre and Thomas Bekker.