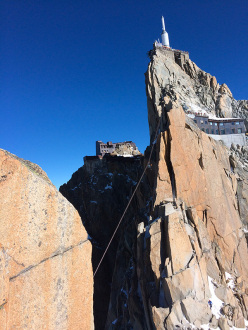 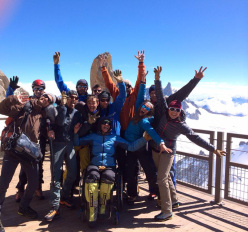 From 2 - 3 September 2014 disabled alpinist Vanessa François spent the night in a portaledge on the Grande Gendarme of Arête des Cosmiques (Mont Blanc) together with Liv Sansoz.

Spending a night out in the mountains is the dream, or nightmare, of all alpinists depending obviously on the situation. But regardless of why you're out beneath the stars, a bivouac in the mountains is something you'll never forget. Especially if it's on a queen mountain such as Mont Blanc.

This is certainly what motivated Belgian alpinist Vanessa François to spend the night in a small portaledge below the summit of the Grande Gendarme on the Arête des Cosmiques together with her close friend Liv Sansoz. At first glance this might not seem anything special, but if we add that François is disabled and needs a wheelchair to get about, then it's easy to understand that her dream was somewhat more profound than most.

The "night out" began months ago, after François' ascent of Zodiac on El Capitan in Yosemite, but the project never took off this summer due to the continuous unstable weather that pervaded the Alps. Then, last week, the duo finally received the good weather forecast they'd been hoping for and all of a sudden they rushed around to organise the almost 1000m of rope and circa 11 people needed to make the dream come true. These included 4 CNEAS mountain rescuers, the 2 Mountain Guides Bruno Sourzac and Manu Roberty, 3 young locals to help, Vanessa and Sansoz plus a camera crew of 4 people.

"The idea" explained Sansoz, "was to take the cable car to Aiguille du Midi and then, via two Tyrolean traverses, reach the base of the Gendarme. Vanessa would then grab the rope I'd fixed from the summit and, using the same system she used to climb in Yosemite, haul her way up to the portaledge where we would spend the night." Everything went according to plan: the first 20m Tyrolean traverse was crossed quickly, followed by the second 80m traverse and François then jumared up the rope to join Sansoz for the night before the -by no means easy - return the next morning.

"Vanessa's main worry was the cold, because she can't feel her legs and toes." explained Sansoz. "We were at almost 3800m, so we had really warm down sleeping bags and expedition clothing. We also set the alarm for every two hours to check the temperature of her legs, but since they were nice and warm at 11 we skipped the next alarms and woke up at 5.00am to see that things were still alright." As day broke the two began preparing themselves and the ensuing return to the cable car, via the two Tyroleans, ran smoothly.

"It wasn't a big climb, certainly nothing like the North Face of the Grandes Jorasses or something like that, but you never know what might lie around the corner. There are always a thousand obstacles that need overcoming, problems that suddenly become much bigger, that's why we're so happy" concluded Sansoz, adding "The experience was outstanding, truly fantastic. Two things in particular struck me: the technical level of the mountain rescue squad who rigged the Tyroleans, very efficient and fast, and all the positive energy that could be felt. There were eleven of us, all there to help, all giving something of themselves. One could really feed off this positive energy. Beautiful!"

For further information check out: www.vanessafrancois.com