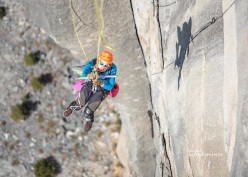 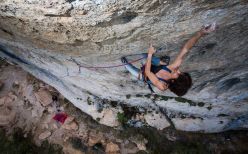 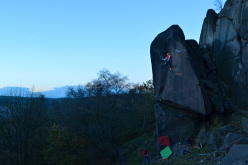 After the recent first repeat of Art Attack in Val di Mello by American climber Paige Claassen, perhaps the time has come to check out what female climbers have achieved during the last few weeks. What follows is by no means complete - the exponential growth in climbing's popularity makes this impossible and we apologise in advance therefore for having missed someone out - but this "focus" gives an idea about how big the women's climbing movement has become. And confirms, once again, how women are by no means... weak!

Let's start at the end, or rather with the famous American shutdown that dashed the plans of numerous climbers who hoped to climb in Yosemite this autumn, but certainly not the dream of Vanessa François. After having trained specifically for a year and a half, the Belgian alpinist wasn't to be "arrêter" and, helped by Liv Sansoz, Marion Poitevin and Fabien Dugits, she reached the summit of El Capitan on 12 October via the route Zodiac. After having spent 4 days on the wall and above all after having done somewhere in the region of 4000 pull-ups... Yes, because following a climbing accident in 2010 François became disabled. Hers is a shining example of determination combined with successfully overcoming obstacles - of all kinds - and a constant, disarming smile. Beautiful.

While on the subject of Yosemite and El Capitan, it's worth noting the free ascent of Freerider by Hazel Findlay. In the past the British climber had repeated both Golden Gate and PreMuir Wall and this year Findlay teamed up with James Lucas to repeat the easiest - so to speak - of the free climbs up this granite monolith. We're talking about those 30 pitches freed by Thomas and Alexander Huber, with a crux somewhere in the region of 8a in the lower section followed by never-ending cracks and the fearsome "Monster Offwidth". Not content, after her 3-day repeat Findlay then raced up The Nose in a day with Hans Florine. Not bad for someone who travelled to the park without a climbing partner and no specific projects in mind!

Talking about monster offwidths: Pamela Shanti Pack, one of the maximum experts at this game, has been up to her usual tricks lately. At Indian Creek the talented American freed the extraordinary second pitch of Goliath defining it as "all pain and no glory ? is the epitome of true American offwidth climbing." She certainly knows what she's talking about: a few weeks back she even repeated Jihad, a 5.11d located in America's offwidth Mecca Vedauwoo. According to Pack the route is "exceptional in that it is both physically brutal but also requires tremendous wide crack artistry." Don't be fooled by the grade, this is only the first repeat since it was freed by Bob Scarpelli 25 years ago!

Changing continent but keeping in line with trad climbing, Emma Twyford recently became only the second English woman to climb E9 with her repeat of Rare Lichen at Ogwen Valley in Wales. So after Findlay, Twyford too has managed to maintain the necessary control and calm to deal with this maximum mix of difficulty and danger encompassed in this emblematic E9 grade.

Talking of things emblematic: one of the most famous gritstone routes of all is undoubtedly Gaia, that slight groove and totally unprotected rightwards traverse at Black Rocks climbed for the first time by Johnny Dawes in 1986. Well, in 2006 America's Lisa Rands carried out the first female ascent and now young Katy Whittaker has seen her dream come true, too: hers is one of the few repeats of this monumental trad climb and, as it happens, only the second female ascent.

After trad and multi-pitches, what remains? Bouldering - the highlight being Shauna Coxsey's 8B repeat of Nothin but Sunshine in the Rocky Mountain National Park, USA - and obviously sport climbing with the brilliant 8c+ repeat, by French climber Alizée Dufraisse after 8 days of work, of Coma sant pere at Margalef in Spain. Same grade, same country but this time at Cuenca, for Eva López; Potemkin is the name of her first 8c+, "plucked" at 42 years of age! Congratulations, sincerely.

This report comes to an end by briefly taking things to the extreme and therefore congratulating the upcoming newcomers: just a few days ago America's Ashima Shiraishi redpointed another two 8c+ at Red River Gorge, while at the same crag Australia's Angelina Scarth-Johnson sent her first 8b. If it's true that climbing is also a beautiful game, then for these two girls this must hold even truer still . Yes, because Ashima is 12-years-old, while Angelina is only 9! Is this a sign that sport climbing (alias single pitch sport climbs at the crag) has a future that we cannot even begin to imagine, or that women are an integral, essential part of its future?