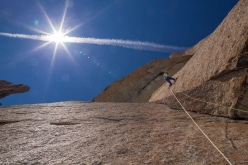 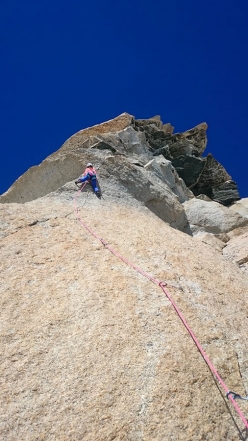 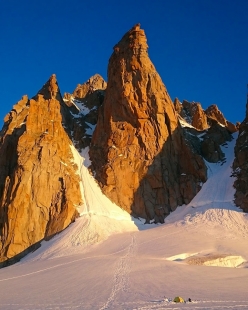 France's Caroline Ciavaldini has completed what she describes as her "biggest project ever", namely a two-day repeat of Voie Petit, the difficult and beautiful outing up the East Face of Grand Capucin in the Mont Blanc massif. First ascended in 1997 by Ciavaldini's mentors Arnaud Petit and Stéphanie Bodet together with Pascal Gaudin and Jean-Paul Petit, this mix of trad and bolt climbing was freed in 2005 by Germany's Alexander Huber with difficulties up to 8b. In the past, it has been repeated by the likes of Austria's David Lama, the UK's James McHaffie & Ben Bransby, Czech climbers Czech climbers Václav Šatava and Dušan Janák and Spain's Edu Marin.

After bidding farewell to a highly successful competition climbing career, Ciavaldini decided to broaden her climbing horizons and rapidly transferred her sports climbing skills and fitness to trad climbing, aided largely by her husband James Pearson. This reached its apex with some daring E8 repeats in Wales and Scotland - a lifetime's ambition for many - but last year Ciavaldini's thirst for adventure pushed her to place she had never been before: above the snow line. For Ciavaldini, it shouldn't be forgotten, comes from the Reunion Island, more famous for its tropical climate and pristine blue waters than crevassed terrain...

Ciavaldini spent the last year training specifically with this route in mind, learning how to climb granite at La Pedriza and honing her mental strength on British trad. Unlike previous climbs this was to be solely her project, hence Pearson was relegated to acting as the belayer, while young French mountain guide Marion Poitevin was asked to provide logistical support for glacier travel, altitude management and general mountain safety.

Ciavaldini attempted the route 4 times prior to her successful redpoint, twice last year and twice this year in order to learn the moves of the harder pitches at half height. Poitevin noticed a weather window and on 5 June the trio set off on what was intended to be simply another reccie, as Ciavaldini had never attempted the final 6 pitches, one of which is graded a whopping 8a. The Voie Petit climbs a striking line to the left of the first route to the 3838m summit, forged from 20 - 23 July 1951 by Italians Walter Bonatti and Luciano Ghigo and the plan was to haul sufficient food and gear and spend the night on the Bonatti Ledge at 2/3 height and then continue working the line the next day.

Shortly before embarking on the route Ciavaldini phoned Petit and he suggested she may as well try her luck and attempt the redpoint. Heeding the Frenchman's advice "...I set off, at 8am, with a 450 route in front of me. In those cases, you have to look baby step after baby step..." Four relatively easy pitches lead to the meat of the route, the 8b crux., dispatched after an exhausting battle: "I nearly blacked out on reaching the belay, a combination of effort and altitude, but I had done it." The Frenchwoman knew she now stood a chance and pulled out all the stops to climb the ensuing 7c+ and 7b+ that led to the Bonatti ledge.

After Ciavaldini's first alpine bivouac, the trio continued climbing at 6:00am the next morning. An easy 5c warm-up led to the pitch that barred her way to the summit: 20 magnificently technical meters graded 8a. "It looked beautiful. Indeed it was technical, but I was patient, found the keys on each movements, then lowered to the bottom of the pitch, and climbed it." Ciavaldini recounts. "I was focused, and mistakes didn’t matter, because there was this enormous bubble of motivation behind me. There was only a few easier pitches and a 7b+ between me an a success, and part of me knew at that point that I had it. But I focused on every proposition one after the other, had to redo the 7b+ twice to succeed it, and reached the summit. That was it, It was done, officially. My big one year dream had become a reality."

The three carefully abseiled off the Grand Capucin, returned safely to the telepherique, spent a night at the refuge and descended to Chamonix to celebrate the next day.