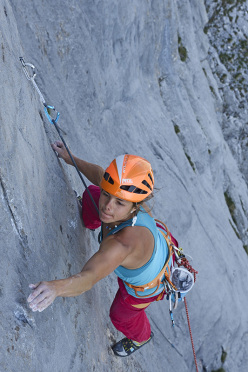 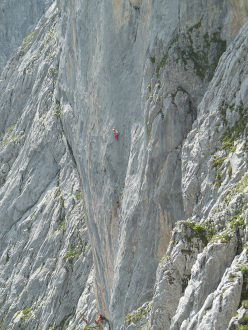 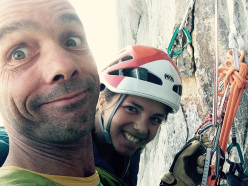 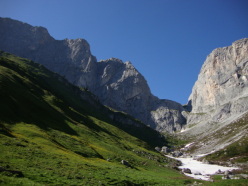 The Kirchlispitzen in Switzerland's Rätikon massif, that host routes like Hannibals Alptraum and Silbergeier.
Photo by Nina Caprez

Interview with Nina Caprez who, together with Marc le Menestrel, repeated Hannibals Alptraum, the smooth limestone testpiece first climbed in 1986 by Martin Scheel and Robert Bösch in Switzerland’s Rätikon massif.

Last week Nina Caprez from Switzerland repeated Hannibals Alptraum, the beautiful, difficult and rarely repeated climb located on the 4th Kirchlispitze in the Rätikon massif. Established ground-up in July 1986 by two of the confederation’s leading lights - the extremely talented Martin Scheel and Robert Bösch - over the years this route has gained a massive reputation for its complex mix of highly technical moves and psychological demanding, run-out obligatory climbing. And although - at least on paper - the five pitches are less extreme than quite a number of other alpine outings, this “nightmare” has caused sleepless nights for many. In recent years Caprez has amassed an impressive curriculum of difficult sports climbs up to 8c+ and demanding alpine multi-pitches - including the first female ascent of Silbergeier immediately to the left - yet on her two previous stints on the route she always returned home “completely beat” as she herself put it. Intent on finding out precisely why this nigh 30-year-old climb is, even by today’s standards, an extremely tough nut to crack, this summer she returned with French climbing legend Marc le Menestrel.

Nina, success, third time lucky!
Yeah, thanks, I’m overjoyed! I’d tried this route in 2009 with Simon Riediker and then, after Silbergeier in 2011, I returned in 2013 with Mélissa Le Nevé. On each occasion we got really beat by the climb, it literally thrashed us, physically and also psychologically. But at the same time it was simply superb climbing, a masterpiece of route finding that kept playing in the back of my mind.

Which is why you returned this summer
With Marc Le Menestrel, someone who knows a thing or two about technical climbing in the ’80’s! Yes, I’d always wondered why exactly Hannibals Alptraum was so difficult. And why the first ascentionists had apparently undergraded it so wildly. I mean, I’ve done some hard routes in the past but I just wasn’t making any significant progress here. And not just me. Was it because we’re no longer capable of climbing that sort of style, or was there something different? I needed to find out.

It was put up by climbers you know very well, two friends of yours, Martin Scheel and Robert Bösch
Yes, what Martin and Röbi did back then was absolutely amazing. They adhered to the really strict ethics that were in place in the Rätikon massif, and elsewhere too, forging the route ground-up, only placing a bolt where they managed to hang off a skyhook. No bolt to bolt. This means there’s lots of really hard, run-out obligatory climbing, something they were really good at. But it’s also important to understand another significant detail: while they made the first ascent of the route - and climbed all sections free - they didn’t make the first single push, free ascent of the route. Their aim at the time was simply to establish this dream - or nightmare - line and were happy with the result.

So who did do the route’s first free ascent?
Oh I really don’t know. There’s a route book signed by various climbers, including the late Peter Schäffler many years ago, but it’s not really clear who did the first proper redpoint.

Not climbing it in one go explains in part why the route’s original grading is so tough
Only in part. The other reason is that the style of climbing is just so touch and go. It’s crazy, you never have a good hold, it’s always a really nerve-wracking game of balance, of unperceptible sensations, of tiny body movements that make all the difference. So you’re never sure whether it’ll go or not. Precision and sensitivity coupled with the game of nerves as some of the run-outs are looong… that’s what makes this route so special. It’s not so much a question of being strong, here you really need excellent footwork…

For the record, if you had to give the route a grade…
Realistically speaking? Marc and I agree on the following for the five pitches: 7b+, 8a, 8a, 8a, 7b+. But as I mentioned, don’t be fooled by the grades on paper, as soon as you start up Hannibals Alptraum you enter a completely different dimension.

Tell us about progress this year?
Well I went back with Marc a few days ago. Back to the Rätikon for the first time after a couple of years absence - a complete catastrophe! We got absolutely kicked! After a rest day we returned and things went a bit more smoothly, I climbed the first two pitches straight off, fell once on pitch 3, then checked out pitch 4. A real monster! I took over twenty 10 meter falls, mentally I was completely spent, but somehow I managed to work it out and reach the belay. Marc then checked out the final pitch and we abseiled off. Another rest day followed, then we decided we just wanted to go an climb. No pressure, we weren’t there to send the route that day. I immediately redpointed the first three pitches, then checked out pitch four and to my surprise got it second go.

All you needed to do was the final pitch…
Yes, I thought I had it in the bag. But pitch 5 has a sting in its tail, a terrible boulder problem, really touch and go. I kept falling, over and over again. In the end I needed 7 attempts to redpoint it and we reached the top in the dark!

Now that you’ve done the route, what can you say about the first ascent?
Well all I can say is that I’ve got massive respect for Martin and Robert. Doing all the obligatory climbing, ground-up, not knowing whether it would be possible or not, taking those long falls… an excellent achievement

A legacy they’ve left for all of us
If we all play by the same rules. You know, people are obviously free to interpret climbing as they wish, but I have to say seeing people climb Silbergeier with a stickclip really surprised me. Surely the whole point of these routes is to be as fair as possible? Using a stick clip shows no respect to the first ascent ethics and climbing history and means they’re completely missing out on a vital part of the game.

Listening to you it’s clear that you rate Hannibals Alptraum as a very special climb indeed
For sure! For various reasons. For a start it was climbed the year I was born! Incredible to think what they were up to before I was even around ;-) Then there’s the fact that I did it with Marc, and the day we did it we were photographed by none other than Röbi himself! And there’s also the coincidence that we topped out in the dark on the very same day as my good friend Barbara Zangerl on Bellavista in the Dolomites. And, last but not least, there’s that line, it’s simply an amazing route. It’s not the hardest I’ve ever climbed, but it’s certainly one of the hardest and something I’ll always be proud of.

Talking of difficulties, here’s a question I’m sure many will ask themselves: is Orbayu on the agenda now? Last summer you climbed all the pitches individually, but not in a single push. Can you see yourselves going back to this?
No. Orbayu was and is a really important chapter in my climbing career, but it’s definitely over now. I gave it everything I got, am happy with what I achieved, but nevertheless at the end of the day it wasn’t quite enough. Coming to terms with this wasn’t easy. Yeah, Orbayu was by far the hardest thing I’d ever tried, but more importantly, it is the first time I’ve had to face failure, the first project I’ve failed to complete exactly how I want to. In the end I realized that success can’t come at any price.

As in?
I know I gave it my very best, playing by my rules, and so that’s fine with me. Some people resort to other borderline tactics just to climb a particular route. But you know, my climbing is all about joy, I have so much love for this sport. And if that joy, that enthusiasm and happiness isn’t there, then I’m not me. If I’m not happy with what - and how - I’m doing something, I’m not Nina. It may sound strange, but accepting failure has made me happy.

And now, we’re certain, you’re even happier, right?
Yes! After two really relaxing days at home we returned to Hannibal on Thursday. This time conditions were great and Marc was super motivated! We still had to remove all the gear from the belays and take out the quickdraws, and this was reason enough for Marc to lead it all. And, would you believe it, he climbed all 5 pitches without a single fall! What a technical master! For me it was an incredible sensation to treat him like a prince, I’d already climbed the route and could devote all my attention and energy. Carry his rucksack, prepare drinks, food etc. We were a real team, just like it should be!