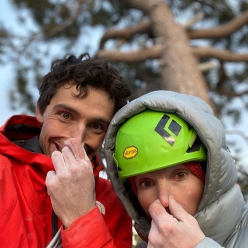 Jacopo Larcher and Barbara Zangerl on the summit of The Nose, El Capitan, Yosemite climbed free over six days in autumn 2019
Photo by Barbara Zangerl 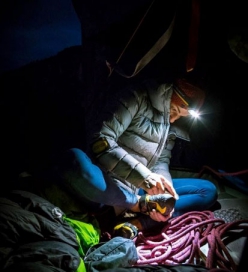 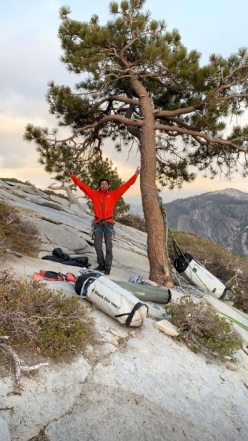 On El Capitan in Yosemite Austria’s Barbara Zangerl and South Tyrol’s Jacopo Larcher have made a free ascent of The Nose, the most famous big wall in the world.

A few days after Belgian climber Sébastien Berthe, Barbara Zangerl and Jacopo Larcher have now also made a free ascent of The Nose on El Capitan in Yosemite, USA. The two completed their free ascent of the most famous big wall in the world after launching upwards six days ago, climbing the route in their usual style, swinging leads on the easy pitches and then both taking the sharp end on all the harder pitches.

Zangerl and Larcher made a first attempt in autumn 2018, but at the time the crux pitches were wet. After a brief period rappelling from the top to check out the crux pitches this autumn, everything went smoothly this time round. The start went well and despite being slowed down slightly by other parties, they both managed to free the first crux, The Great Roof. After resting for a day they then tackled the hardest pitch of all, the complicated and beautiful Changing Corners, before topping out a few hours later.

In some respects their ascent might be considered a mere formality as by now they are some of the most expert big wallers on El Capitan: together they free climbed El Niño in 2015, Zodiac in 2016 and Magic Mushroom in 2017. Zangerl followed this up with her free ascent of the Pre-Muir wall in June this year and she is now quite possibly the woman who has climbed most routes free on El Capitan.

That being said, climbing this monumental route established in 1958 by Warren Harding, Wayne Merry and George Whitmore after 47 days and freed by Lynn Hill in 1993 is never a foregone conclusion and Larcher's words underline the importance of their repeat: "It's such an historical route, that we both had always wanted to free climb. It’s such a good feeling when dreams come true ... and together is even better"

THE NOSE - a brief history of free ascents
Although The Nose is the most popular route in El Capitan, paradoxically, free ascents are extremely rare. After Lynn Hill made her ground-breaking first free ascent of The Nose over a four-day period in mid-September in 1993, in September 1994 she returned to make her era-defining sub 24-hour free ascent with Steve Sutton. Tommy Caldwell and Beth Rodden swung leads and free climbed The Nose in 2005, and Caldwell climbed the route free in just 11 hours a fortnight later during his Nose + Freerider 24-hour double. In November 2014 Dutchman Jorg Verhoeven climbed The Nose free in three days, while Keita Kurakami required five days for his rope solo free ascent and 15-year-old Connor Herson required three with his father Jim Herson in 2018. Sébastien Berthe checked in with his 8-day ascent in autumn 2019, followed a few days later by Barbara Zangerl and Jacopo Larcher. For the record, in 1998 America’s Scott Burke free climbed all the route except for the crux pitch, The Great Roof, which he was forced to climb on toprope as it was wet at the time. It is worth noting that until now, no one has climbed The Nose ground-up free in a single push, ie. climbing the entire route free in one go, without ever returning to the ground. Bar the onsight, a single-push ground-up free ascent must be regarded as the new frontier.

I normally hate selfies, but the deserved one. It‘s such an historiscal route, that we both had always wanted to free climb. It’s such a good feeling when dreams come true ... and together is even better @thenorthface @lasportivagram @blackdiamond @frictionlabs