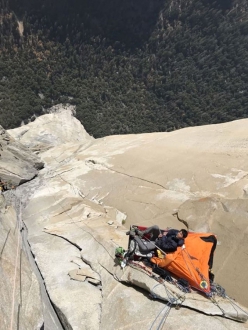 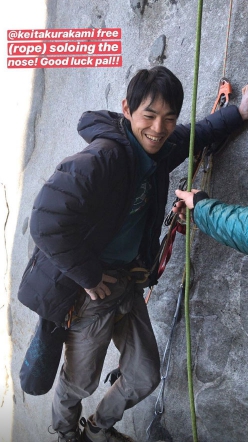 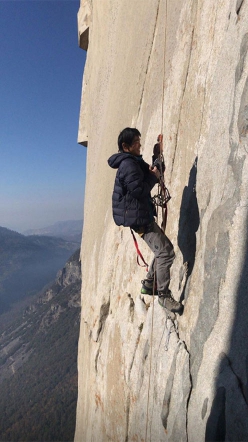 Keita Kurakami jumaring up his ropes while making his rope-solo free ascent of The Nose on El Capitan in Yosemite, November 2018
Photo by Hazel Findlay / hazelfindlayclimbing.com 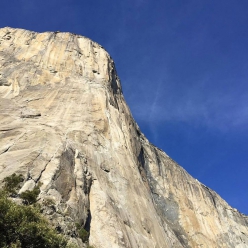 Climbing solo and self-belayed for five days, Japan’s Keita Kurakami has repeated The Nose on El Capitan (Yosemite, USA). This is the first time that the route freed in 1993 by Lynn Hill has been climbed rope solo all free.

November 2017: we reported about Keita Kurakami and his free ascent of The Nose, the most famous big wall in the world located on El Capitan in Yosemite. Some may remember that a few days later the Japanese specified that, due to bad weather, he had been forced to halt his climb after the first crux pitch and take refuge at the top of El Capitan, before continuing his ascent three days later. That is why he - quite rightly - didn’t consider his repeat a "true free ascent", and he vowed to return a year later.

Fast forward to November 2018: once again we are reporting about Kurakami, but not as we’d imagined regarding a free ascent of The Nose which was only a matter of time, but regarding his free ascent, carried out rope solo.

In practice, Kurakami raised the stakes considerably and climbed all pitches free, but instead of being accompanied by a climbing partner, he did everything on self-belay. Kurakami told planetmountain.com that he spent five consecutive days climbing everything on lead and free. He fell more than ten times, lowered off to the stance, and pulled the ropes before leading the pitches free. Including obviously the crux pitches: the legendary Great Roof and the equally iconic Changing Corners immediately afterwards. Outstanding.

Kurakami announced his feat from the lip of the El Cap via Instagram, stating "One hour ago, I sat down here - alone. Thousands meters free climbing, thousands meter rappelling and thousands meter jumer. It’s the process on my way." After descending back to the valley floor he confirmed to planetmountain "I took over 10 falls" adding "but in the end I led all pitches free. And now I’m happy!"

This is the first time that The Nose has been climbed rope solo all free. The route was completed after a 47-day effort in 1958 by Warren Harding, Wayne Merry and George Whitmore, and climbed free for the first time in 1993 by Lynn Hill. A year later Hill produced one of the most significant ascents of all times, climbing the entire route free in under 24 hours. In the years that have followed The Nose has become one of the most famous, coveted and popular rock climbs in the world, but despite its popularity, very few have managed to repeat the 1000 meters free. In 2005 Tommy Caldwell and Beth Rodden swung leads to climb all pitches free, and Caldwell followed this up a week later by leading The Nose free in under 12 hours before combining it with Freerider in less than 24 hours. In November 2014, Dutchman Jorg Verhoeven managed to repeat The Nose free in three days. Now Kurakami has added his name to this extremely short list.

Discussing Kurakami’s recent undertaking, Verhoeven - who knows The Nose well and who in 2013 made an almost completely free rope solo ascent of nearby via Freerider - told planetmountain.com: "It's great that he came back to make a ground-up continuous ascent, and it is very impressive that he did it rope solo. I think that many are taken aback because they cannot imagine what climbing rope solo really entails, but with a little bit of practice it works almost as well as having a climbing parter. What is often not understood though is how difficult it is to do everything on your own, and always keep the psyche and self-confidence high. In my opinion this is the key to this very special ascent, in addition obviously to actually climbing The Nose free which (strangely) doesn’t happen very often!"

One hour ago, I sat down here - alone. Thousands meters free climbing, thousands meter rappelling and thousands meter jumer. It’s the process on my way. So I climbed Free The Nose from ground in a push as solo style. It’s 5th and it would be 1st. My journey on The Free Nose has done!!! #thefreenose #solo #yosemite