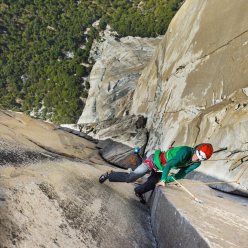 Jorg Verhoeven has successfully free climbed one of the finest and most famous rock climbs in the world, The Nose on El Capitan, Yosemite. Precise details are as yet still lacking, but as reported the Dutch climber had worked the route earlier this autumn before finding a partner, waiting for the stormy weather to abide and then setting off at the start of this week.

Verhoeven climbed the route over three days and sent one of the hardest pitches, the iconic Great Roof on his first go on day 2, while the equally demanding Changing Corners pitch was redpointed after two falls the following morning. After his ascent Verhoeven commented "So incredibly glad I pulled it through. A lot of respect to Lynn Hill for freeclimbing this route 20 years ago! At least the male/female statistics are equalized now! Feels like a big chapter has come to an end. PSYCHED!!!"

Verhoeven's joy is comprehensible. First ascended over a five week period by Warren Harding, Wayne Merry and George Whitmore in 1958, The Nose has transformed into one of the most sought-after routes in the world and was first climbed free in 1993 by Lynn Hill. Her ascent took the climbing establishment by storm and is hailed as one of the most significant free climbing achievements ever. A year later Hill returned and took things one stage further, climbing the route in a just one day. While Scott Burke repeated the route in 1998, the American was forced to toprope the Great Roof pitch as this was wet at the time. In 2005 Tommy Caldwell and Beth Rodden repeated the route, both climbing all pitches free and swinging leads, while a week later Caldwell returned to lead all pitches himself. A fortnight later Caldwell then stormed up The Nose and Freerider in less than 24 hours.

The Dutch winner of the Lead World Cup 2008 is now only the third person to lead the entire route free but, details and statistics aside, this is no doubt one of Verhoevens's absolute personal highlights. Like, in absolute terms, that indelible and incredible first ascent and successive first one-day ascent carried out by Lynn Hill two decades ago.


02/10/2002 - Lynn Hill and The Nose
Interview with Lynn Hill, a world-class sport climbing symbol. Her legendary one-day free ascent of The Nose on El Capitan in 1994 Yosemite and her entire vertical world as seen by Lynn herself.