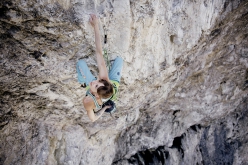 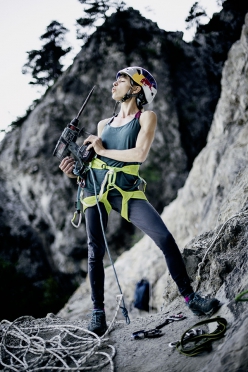 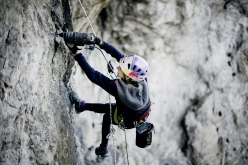 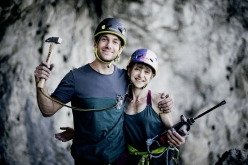 Climbing provides me with plenty of opportunities to live out my love for climbing in different ways. Usually I test my limits on existing sport climbs, as a mere “consumer”. Only once, at Leonidio in Greece in 2015, did I actually bolt some new routes my own. Last autumn though I decided to search for something new again.

My husband Bernie regularly bolts new routes and is fairly experienced at the whole new routing game. I made the most of this knowledge and asked him to lend me a hand where necessary. First though we searched for a virgin rock face and after a while we found a place not too far from my home region, Imst.

In the beginning I was worried about the poor rock quality which appeared to be too rotten, but actually I’d already fallen in love with this place and its alpine feel. Bernie agreed to help.

One line in particular attracted me: it starts in the center of the crag before traversing left through an steep roof and continuing to the top. Bernie fixed a rope and I worked my way down. First I checked out if the line was even feasible, searching for holds and potential sequences, then I removed all the dirt and loose rock and started placing some bolts. While I was quick at first, the loose rock around the roof slowed me down.

I asked Bernie for some help. After several hours my line was ready for the first attempts. It took me a few days to unravel the right sequences and clean the rock even more, and I have to admit this cleaning process was quite tiring. That's why I was so happy when I finally got the chance to make some serious attempts.

I failed on numerous occasions, but then one day I managed to put in just the right effort to free the line. I’d found the right flow and overjoyed I screamed as I clipped the chains of my Schatzinsel, my treasure island. As to the grade, grade, this isn’t the most difficult route I’ve climbed, but it is certainly one of "my" most difficult routes. Maybe somewhere in the region of 9a. Those who repeat it will give us a clearer picture.

18.06.2015
Nifada, Angela Eiter and Bernie Ruech climb untouched rock in Greece
Austrian climber Angela Eiter reports about her recent trips to Greece where, close to Leonidio, she and her partner Bernie Ruech developed Nifada. The new crag currently hosts 14 routes up to 8c+.