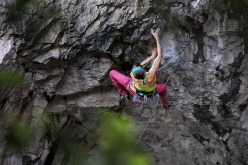 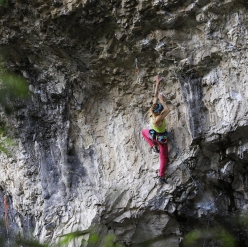 Two weeks ago, I tried an incredible line at the Pueblo sector of Massone at Arco, namely Pure Dreaming freed by Adam Ondra. I was surprised that there was still room to include an independent route through this crazy overhanging roof. Stoke was high and I smiled. However, it rained a lot and the wall was wet. I therefore returned last week for five days together with my husband Bernie Ruech.

Although it was quite hot this time and conditions were not perfect, it was nevertheless OK to climb. I checked the moves again and noticed some progress. I then fell off the last hard moves four times and began to wonder if I could still give it a good go on my last day, where tiredness and warm temperatures challenged me. Motivation was low at first, but I really wanted to give it another try. Completely unexpectedly I managed to send this beauty on my last day, on my last possible try. Thanks Alfredo Webber for bolting this line.