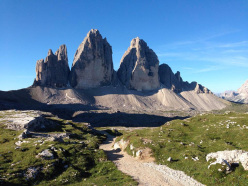 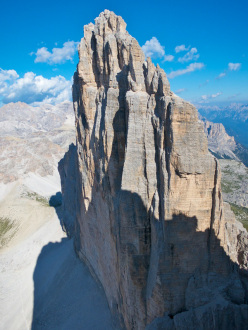 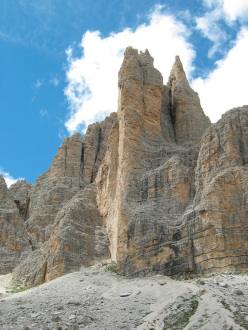 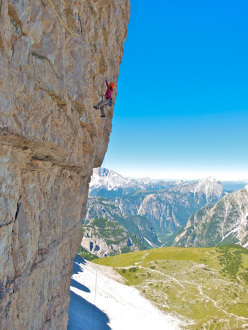 Cima Ovest, Cima Grande, Cima Piccola: the Tre Cime di Lavaredo offer unparalleled rock climbing throughout the Dolomites. Planetmountain.com provides an overview with some of the routes that have become milestones in the history of mountaineering, such as Spigolo Giallo, Via Comici - Dimai, Via Cassin, Hasse Brandler, Spigolo degli Scoiattoli and many more.

The Tre Cime di Lavaredo are three enormous free-standing limestone towers, unique not only to the Dolomites, but also to the rest of the world. Their yellow tinted North Faces play host to numerous alpine routes, many of which, thanks to their difficulty and natural beauty, have become true classics. Almost all, even the old aid-routes, have been freed, thus becoming milestones in the history of mountaineering. The initial sensation when climbing this stratified dolomite can be disconcerting; the rock is in fact loose in many places. Thankfully though, most popular routes have by now been cleaned. The climbs have plenty of pro, especially the old aid-routes, but not all in-situ gear is trustworthy. Popular routes such as Spigolo Giallo are best avoided at the height of summer as they can get dangerously overcrowded.


First ascent: Lothar Brandler, Dieter Hasse, Jörg Lehne, Sigi Löw, 1958
An important old aid-route that takes a direct line up the North Face of the Cima Grande. Regardless of the style of ascent, the route, due to its 18 pitches, is very tiring and thus requires a certain level of fitness. Most belays are bolt protected and the pitches have plenty of gear, however not all pegs are trustworthy.

Via Comici - Dimai
First ascent: Emilio Comici, Giuseppe & Angelo Dimai, 13-14/08/1933
Via Comici is the classic example of climbing in the Dolomites. Although difficult if climbed without using aid, its popularity is justified by its beauty and excellent rock.

Via Dülfer
First ascent: Hans Dülfer, Walter F. von Bermuth, 1913
The cold West Face hosts the via Dülfer, a direct and elegant line, somewhat less popular than the other routes. It is relatively short, considering that it is on the Cima Grande, and is solid UIAA 6 with some slightly harder moves on the second pitch. The upper chimney provides the backdrop to an almost obligatory photo of climbers silhouetted against the sky and shadowy walls.

ISO 2000
First ascent: Kurt Astner, Kurt Brugger, 1998
Modern bolt and peg route to the left of Via Comici. The upper section is loose and less protected, most climbers therefore descend at half-height.


CIMA OVEST
Via Cassin
First ascent: Riccardo Cassin, Vittorio Ratti, 1935
A beautiful route, one of the classics in the Dolomites. Exposed and sustained climbing up to 7a, on fairly solid rock.

Spigolo Scoiattoli
First ascent: Albino Michieli, Lorenzo Lorenzi, Gualtiero Ghedina, Lino Lacedelli, 1959
An aesthetic and exposed line up the imposing NW arête which goes free at 7a. The rock is fairly solid, except for on the first pitches it shares with Via Cassin.

Italo Svizzera
First ascent: Candido Bellodis, Beniamino Franceschi, Albin Schelbert, Hugo Weber, 1959
The route climbs the center of the wall through the imposing overhangs. Aid was used on the first ascent, but nowadays it goes free at 7b. Either follow the original line in the upper section or, recommended, climb up the Cassin.


CIMA PICCOLA
Spigolo Giallo
First ascent: Emilio Comici, Mary Varale, Renato Zanutti, 1933
Every year hundreds of climbers flock to the Spigolo Giallo. Few routes have such a perfect line, and few routes get quite so crowded. It is best climbed out of season and preferably avoided at the weekends. The difficult sections at the start and near the finish follow a beautiful line near the arête, whilst the less interesting middle section rises up to the right.

CIMA PICCOLISSIMA
Via Cassin
First ascent: Riccardo Cassin, Luigi Pozzi, Gigi Vitali, 1934
The short overhanging yellow wall of the Cima Piccolissima is breached by the demanding Via Cassin. All loose holds on this stratified dolomite have been cleaned. The route faces SE and is therefore climbable before and after summer.

Getting there
The ideal starting points are Cortina d'Ampezzo and Auronzo. These can be reached from the north via the Pusteria Valley, or from the south by first taking the motorway (A27) to Longarone and then following the state road northwards. Both points of departure lead to Misurina, from where a private toll-road winds steeply almost to the base of the Tre Cime's south faces. Park the car at Rifugio Auronzo, situated at the end of the road and either sleep here or in Rifugio Lavaredo, reached by following the path for 15 minutes underneath the majestic South Faces which contain, amongst many other famous routes, the Spigolo Giallo. The two rifugi, nestled almost at the base of the towers, offer good accommodation and must be booked in advance.

Taken from the book Rock Climbing in the Dolomites, trad and sports routes around Cortina, 2004

02.07.1999
Catherine Destivelle makes solo repeat of Hasse - Brandler at Cima Grande di Lavaredo, Dolomites
French alpinist Catherine Destivelle has made a solitary repeat of the Hasse - Brandler route up Cima Grande, Tre Cime di Lavaredo, Dolomites.
21.04.1999
First winter ascent of Via Barbier by Christoph Hainz and Kurt Astner
In January the Pustertal alpinists Christoph Hainz and Kurt Astner scored a real coup by making, in two attempts, the first winter ascent of Via Barbier up the North Face of Cima Grande di Lavaredo. This difficult climb was established in summer 1989 by the Czech brothers Miroslav Coubal and Michal Coubal.