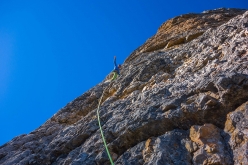 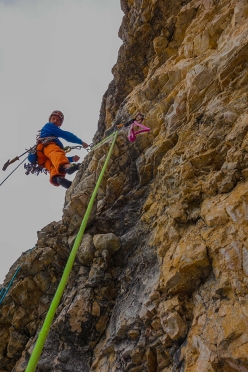 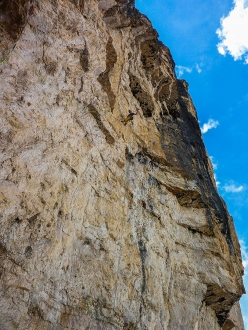 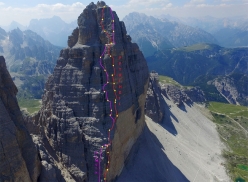 During the summer of 2016 the South Tyrolean mountain guide Hannes Pfeifhofer and his climbing partner Dietmar Niederbrunner made the first ascent of Petri Heil, a new peg and bolt protected climb with difficulties up to 6c+ up the lefthand side of the northern face of Cima Ovest di Lavaredo in the Dolomites described as a "beautiful route up excellent rock in an amazing setting."

Pfeifhofer explained "I’d played with the idea of ​​climbing a new route up the lefthand side of the North Face of Cima Ovest for a long time. Last summer I repeated the classic Demuth arête several times with my clients and my gaze kept falling on the wall to the right. I noticed there was still room for something new and that there were enough cracks and corners that would allow us to follow a logic line."

The new route starts to the right of Demuthkante, first ascended on 24 July 1933 by Fritz Demuth, Sepp Lichtenegger and Ferdinand Peringer, and after the seventh pitch it shares the next two pitches with this airy NE arête before breaking out left and continuing independently left to summit.

Pfeifhofer and Niederbrunner were forced to retreat on several occasions due to the bad weather, also because the first 7 pitches quickly funnel the runoff water when it rains. The two climbers needed a total of five days to establish the climb, at times resorting to aid and fixed ropes.

Pfeihofer recounts "The result is a fantastic route that offers great climbing. It's hard to believe that such a beautiful line up perfect rock in the Tre Cime di Lavaredo hadn’t been discovered yet."