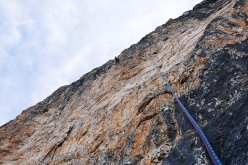 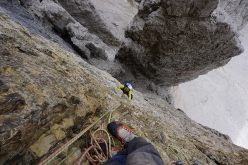 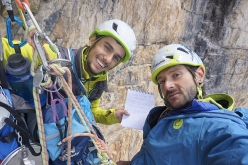 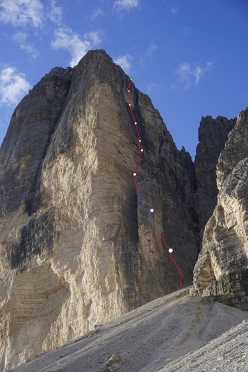 It seems almost impossible that there’s still room for something new at the highly popular Tre Cime di Lavaredo, yet like a gift that keeps on giving, every year the symbol of the Dolomites continues to provide unchartered lines. Like Schatten der Großen up the NW Face of Cima Ovest, first ascended by Manuel Baumgartner and Alexander Huber, the alpinist from nearby Olang, not to be confused with his famous German namesake.

Baumgartner told planetmountain.com “Back in 2015 I noticed the obvious corner system on the lower part of the NW Face of Cima Ovest. On the 21st of June this year I walked up to take a look, and as I climbed two pitches to the right of the leaning tower I came across some old pegs and decayed belays. After asking some "veterans" I found out that this was an rarely climbed early variation start to Spigolo degli Scoiattoli. This variant traverses left following a narrow ledge. The direct line, the route I wanted to follow, was still free therefore."

Baumgartner and Huber needed three days to ascend the climb ground-up. "We wanted to open the establish the route adopting a traditional approach," explained Baumgartner, "as far as this face is concerned, only great alpinists of the past have left their mark, such as Heinrich Harrer (one of the first ascentionists of the North Face of the Eiger) and Hans Dülfer, whose route has unfortunately almost completely been forgotten about. That’s a pity because he climbed it more than 100 years ago and even today it’s a great route."

The new climb is called "Schatten der Großen" in the shadow of the big ones, it is protected with pegs and during their ascent Baumgartner and Huber also resorted to (A0) aid before the first free ascent. Towards the top the route crosses both the Harrer - Wallenfels (V, Heinrich Harrer, Kurt Wallenfels, 17/07/1934) and the Dülfer climb (IV+, Hans Dülfer - Werner Schaarschmidt 29/07/1912).