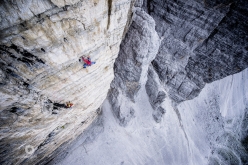 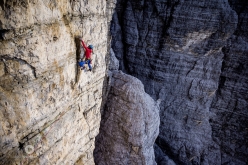 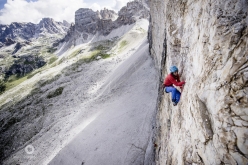 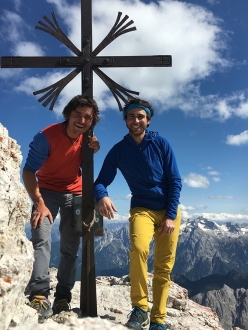 Interview with South Tyrol’s Simon Gietl who, together with, Vittorio Messini made the first ascent of ‘Das Erbe der Väter’ up the North Face of Cima Grande di Lavaredo in the Dolomites. After sharing a start with Via Comici, the new route runs to the right, breaches difficulties up to IX-, and was established ground-up without bolts.

A new route has been climbed up the famous North Face of Cima Grande di Lavaredo that deserves closer inspection. The climb is called Das Erbe der Väter - the legacy of our ancestors - and was put up by Simon Gietl and Vittorio Messini and shares the starting pedestal of the famous Comici - Dimai, the symbol of the Dolomites established in 1933 by Emilio Comici and the brothers Giovanni and Angelo Dimai. Where the Comici route traverses left the new route runs independently and carrell to the summit. The new route was climbed without bolts and, surprisingly for the crowded Cima Grande, crosses no other climbs. Gietl and Messini began forging the route ground-up in autumn 2015 and the first free ascent was carried out at the end of july 2016, after having breached difficulties up to IX-.

Simon, tell us how your new route up the North Face of Cima Grande di Lavaredo came about
Whenever I guided clients up the famous Comici route, I always looked to the right and wondered: "What routes climb that section? Eventually curiosity got the better of me I decided to see for myself. A few days later I met my friend Vittorio Messini and over a beer I told him about my idea and he laughed: “I’d thought exactly the same thing" he replied. So a couple of days later we set off together towards the north face.

From the photos the line looks very logical. Why hadn’t it been climbed before?
That’s a good question and we asked it ourselves :-) Our line is independent, and the closest it gets to Via Comici is about 10, 15 meters.

So let's go straight to the point: what makes this route so particular?
Our goal was to create a natural line, without using bolts and without crossing other routes. We succeeded.

How?
We started in autumn 2015. During four very cold days we put up the first four pitches and left a fixed rope. We returned in spring 2016 and invested another four days. On 28th of June we topped out on the ledge, using a mix of free climbing and aid climbing. Our goal was, as I said, to not use any bolts, and had we got to a point where we weren’t able to continue without bolts, then we would have abandoned our attempt.

What was the most difficult thing?
Without a doubt the crux pitch, the fifth, we needed hours and hours just to climb those 40m. The rock is very compact there and consequently it’s difficult to place pegs. And it wasn’t easy to judge the solidity of the flakes, whether we could weight them or if they would snap off. On the seventh pitch we wanted to climb a yellow corner, but towards the top of this we came across loose rock and we couldn’t get any further. So we lowered down for 6m, then traversed right for a further 10 meters to reach another corner, and this proved to be the right way upwards.

After the first ascent, you still needed to free the route
Yes, and so after a further two days of cleaning and attempting the pitches I was ready to try the redpoint. On July 25, together with Martin Niederkofler, I started my first attempt, but after 5 pitches we were forced to retreat because of the rain. I returned with another good friend, Andrea Oberbacher, on the 27th and managed to free it.

Things ran smoothly?
Well actually it began raining once again, after the sixth pitch. Sometimes a bit more, sometimes a little less. But I wanted to try it at all costs. I placed all the pro as I climbed and at round 16:00 we reached the ledge. Tired but happy.

The route is called Das Erbe der Väter, the legacy of our ancestors ...
We succeeded in establishing a new route up the most famous north face of the Dolomites, we are happy and proud to have done so without bolts. But we cannot help but think about Comici, about the Dimai brothers, Cassin and Ratti ... about their enormous achievements, with the gear of that era! We have enormous respect and admiration for what they did in traditional style on the steep yellow faces of the Drei Zinnen. Coming up with a name for our climb was simple. With our new creation we wanted to honor the really important climbers of the early development of the Drei Zinnen at the start of the 20th century. Hence Das Erbe der Väter, the legacy of our ancestors

To recap: a new route, independent and without bolts up the North Face of Cima Grande di Lavaredo, the Drei Zinnen ... what does this represent to you?
Well it means a lot to me. This is where I started climbing, and of course I always like to come back here. Leaving a mark on the North Face of Cima Grande is something special, and even now I struggle to believe that we managed to establish this wonderful line, it’s like a dream come true!