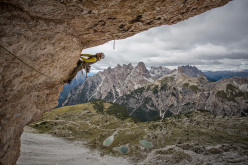 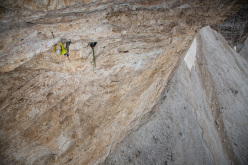 On the North Face of Cima Ovest, Tre Cime di Lavaredo (Dolomites) Dave MacLeod from Scotland has climbed Project Fear, a difficult new 130m variation that leads to the crux pitch of Pan Aroma and breaches difficulties up to 8c.

There's a new route up Cima Ovest di Lavaredo in the Italian Dolomites – or better still, an important new variation - that has been put up by Dave MacLeod, the Scottish climber who in this rainy summer evidently found himself at home on the historic north face. MacLeod climbed the first 90m of the 1968 aid first ascended by Gerhard Bauer, Erich Rudolph and Walter Rudolph and then, instead of continuing leftwards via the aid line, he forged into unknown territory to reach the enormous overhanging amphitheater via an almost direct line. Three pitches lead to this, namely a 6c, a 7b+ and an 8a+ described by the Scotsman as "the best pitch I’ve ever seen in the Dolomites." At this point the new variation (130m in total) joins the crux pitch of Pan Aroma, the 8c freed by Alexander Huber in 2007 that continues to the summit via the Cassin route.

MacLeod's ascent was obviously severely hampered by poor weather, so much so that during his three week stay he spent less than 10 days on the wall. After the first days searching for a free line, MacLeod failed to find a way to the huge roof that would have brought him to Pan Aroma, and it was only on the last day, after having attempted this crux pitch, that he spied a possible new sequence from his new vantage point above. But the trip had come to an end and MacLeod was forced to return home empty-handed. A fortnight later he returned to the Dolomites, this time with Alan Cassidy and Rob Sutton and while they worked, and then repeated Bellavista, MacLeod unlocked the sequence upwards on his own, then with the help of the others cleaned the "spectacularly loose rock" to further figure out "which holds were solid enough." He was now set for a free ascent, even though he had never made significant headway on the crux pitch on Pan Aroma; having climbed mostly from one bolt to the next, he gave himself 5% chance of success.

Together with Alan Cassidy MacLeod then set off late, at 11:00 am to avoid the initial extreme cold. The first section ran smoothly, as did the long 8a+ endurance pitch – it is worth noting that he describes the fall from here as "scary but basically safe." All that needed to be climbed now was the 12m roof, the final hurdle graded 8c, and MacLeod describes the ensuing climbing as follows: "The next three minutes were not particularly pretty. Feet pinged off wet footholds, brute force kept me on the rock and I don’t think I’ve ever had a higher breathing rate. Then I found myself hanging from a huge jug on the vertical expanse above the final roof, unable to get a word out between gasps for oxygen. After a minute or two, I’d calmed down enough to flop onto the belay ledge and grin." MacLeod and Cassidy then continued to the summit, which they reached at 11 pm in "glorious full moonlight and a perfectly warm and still night."

The new variation is called Project Fear, a name which refers to the unofficial campaign against Scottish independence, decided in the referendum on 18 September 2014.

Project Fear
Grade: 6b+, 6c+, 7a, 6c, 7b+, 8a+, 8c, 6c+, 6c+, 5+, 6a, finish up the Cassin route
Note: All the gear on the pitches are pegs (some good, some bad) apart from one bolt placed on the 7b+ to protect the runout across the nose away from the vertical wall, which would otherwise be very serious, with some fragile holds. The belays on the Bauer – Rudolph route and Pana Aoma have bolts, bolt belays were added to the new pitches.Furthermore, MacLeod recommends not to trust the old drilled pegs on Bauer – Rudolph route as these break.