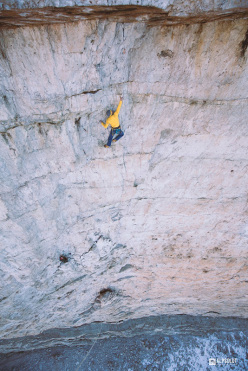 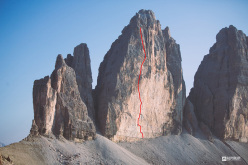 On 27/08/2015 Much Mayr, climbing with Guido Unterwurzacher, made the first free ascent of the Spanish Route on the North Face of Cima Grande di Lavaredo, Dolomites.

Almost 40 years after the the first ascent, this summer Austria’s Much Mayr managed to finally pull off the first free ascent of the Spanish Route up the North Face of Cima Grande di Lavaredo in the Dolomites. First climbed  back in 1977 by A. Gallego, M. Lozano, J. Carillo, A. Gomez, the route lay practically dormant and forgotten about, until Italy’s Mauro Bubu Bole focused his attention on it in 2003. The whirlwind climber from Trieste had previously made the first free ascent of the Couzy route on Cima Ovest as well as the first free ascent of Camillotto Pellesier on Cima Grande, and after making the Spanish route’s first repeat and first solo, he got to work in an attempt to complete his hattrick of first free ascents in the Tre Cime di Lavaredo group. The huge roof on pitch 3 proved too tricky though and at the time Bole resorted to three points of aid, grading the 450m route 8a+ A0. In the ensuing years the route received some traffic, not much in truth, and all climbers were been stumped by the technical difficulties in the roof combined with the fact that some of these holds are perennially wet.

Mayr’s Tre Cime di Lavaredo track record is impressive to say the least: the Innsbruck based alpinist onsight soloed the Cassin route on Cima Ovest in 2002, while in 2006 he onsight soloed the Comici Dimai climb on Cima Grande in just over an hour before concluding the day with a fast ascent of Spigolo Giallo on Cima Piccola in the same style. In 2003 Mayr had made the first repeat of the Couzy route (suggesting 8a+) and it was then that he first spoke to the Italian about the Spanish Route: "Almost 12 years ago, Bubu in his typical passionate, amiable way, he told me about the adventurous, scary Spanish Route and its incredibly rusty, tiny bolts. And also about its crux pitch with the horizontal roof, that he could "only" climb A0, with three points of aid, and that he had graded 8a+, A0. When I asked him if it might be possible to free or whether he would try again, he energetically shook his head, laughing."

Mayr attempted the route for the first time in 2012, unsuccessfully as many of the holds were moist or even wet. But, as he points out "I felt like it could go, maybe not for me, but at least in principle." As mentioned, he returned this summer with Guido Unterwurzacher and the two immediately got to work on the crux pitch. They replaced 2 bolts on this pitch and a further 3 on pitch 6 and despite the heat and drought many holds remained wet, resulting in Mayr taking countless falls off the intensely bouldery crux "At some point I stopped keeping count, but I think I fell at least 20 times on the move to the jug above the lip, much more often than I ever fell on the same move on any sport climb …"

On the 27th of August Mayr stuck the crux on this second attempt that day. He controlled the swing and quickly reached the belay, and then led the ensuing 7c pitches before swinging leads with Unterwurzacher on the easier pitches. These led - past old bolt anchors (Bole’s new ones had surprisingly had been removed) - to the huge central ledge system shortly after 7 pm. From here the two descended on foot via the normal route. While Mayr feels the route checks in at 8b+, Unterwurzacher believes it could be 8c, hence the 8b+/8c compromise. Future ascentionsists will provide the verdict.

22/10/2003 - Tre Cime di Lavaredo, Mauro Bole repeats the Spanish route
At the start of October on the North Face of Cima Grande di Lavaredo (2999m) in the Dolomites Mauro Bubu Bole made the first repeat of the 1977 Spanish route, grading it 8a+ with three points of A0 aid.