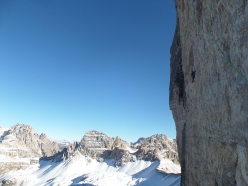 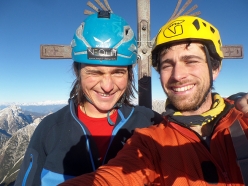 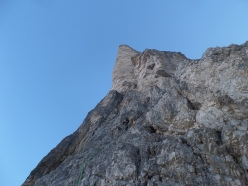 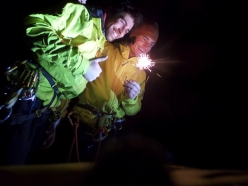 Winter mountaineering: on 31/12/2016 at the Tre Cime di Lavaredo in the Dolomites the alpinists Simon Gietl and Vittorio Messini climbed in a singole day Via Comici-Dimai on Cima Grande (in 1:45), the Cassin route up Cima Ovest (2:45) and the Innerkofler route up Cima Piccola (1:15).

Merely a few days after the Tre Cime di Lavaredo winter trilogy carried out by Christoph Hainz and Simon Kehrer, at the end of 2016 the alpinists Simon Gietl and Vittorio Messini took advantage of the quite exceptional conditions in the Dolomites to make another fast enchainment up these famous North Faces.

Gietl and Messini chose the same three routes climbed in 2014 by Ueli Steck and Michi Wohlleben when the Swiss-German duo claimed the first winter trilogy, namely Via Comici - Dimai on Cima Grande, the Cassin route on Cima Ovest and the Innerkofler climb on Cima Piccola. Gietl and Messini climbed to the summit of all three peaks in a quite remarkable time: a mere 1 hour and 45 minutes to reach the highest point on Cima Grande, 2 hours and 45 minutes to reach the summit cross on Cima Ovest before rushing up the Cima Piccola normal route, established by the Innerkofler brothers, in just 1 hour and 15 minutes.

In order to achieve these times the two simul-climbed almost everything, separated by 30m of rope and sometimes just two pieces of gear. This is an increasingly common tactic among top alpinists and is, it goes without saying, also associated with a significant degree of risk... The three routes were climbed in a total time of just 5 hours and 45 minutes.

In this manner Via Comici was dispatched with in three long pitches, as was the Cassin route, while on the Innerkofler climb the two never actually met at the belays, only on the summit. “Climbing like this isn’t particularly sociable” Gietl told planetmountain.com laughing "but we had great fun!”

Before their enchainment the two contacted Hainz and Kehrer for information about the routes. The best advice they gave you, we asked Gietl? "To give it a go. And to use an e-bike. They’re fantastic. It’ takes half the effort, and when you get to the base of the route, you’re completely fresh. "And compared to Steck & Wohlleben ascent, or that of Hainz & Kehrer, what do you think? "Why?" replied Gietl “There’s no need to always compare everything. All three are beautiful achievements in the mountains."

Everyone who has climbed on the Drei Zinnen, the Tre Cime di Lavaredo, and admired their beauty and majestic appearance, wants to have reached the summit of Cima Grande, Cima Ovest and Cima Piccola at least once in their life. Simon and I also had this wish, but thankfully we’d fulfilled it many years ago. We’ve been to the Cime on many occasions, not only to try and repeat difficult routes, but also in search of new territory, such as our Das Erbe der Väter.

When we first heard that Ueli Steck and Michi Wohlleben had pulled off the north face winter trilogy in 2014, we’d already thought about it ourselves, but we’d never got round to doing it. Until the end of last year, when we met in Toblach to check out another potential new route. We knew that Christoph Hainz and Simon Kehrer had been up there two weeks previously, and that conditions were good. As we walked below the base of the routes, we realized that we’d have to abandon our plans for a new line. But Simon managed to convince me to try the winter north face trilogy the following day.

So at New Year's Eve we set off at 6am from the toll booth. Once again we rode our e-bikes up to the small chapel below Cima Piccola. We quickly marched to the base of Cima Piccola, where we stashed our rucksacks before continuing to the base of the Comici - Dimai route below the north face of Cima Grande. Simon set off immediately armed with a bunch of tibloc and lots of quickdraws. Three pitches later we stood at the central ledge and glanced at our watch, 1 hour and 45 minutes. ”Surely that can’t be right..." we thought to ourselves, somewhat surprised, before continuing along the ledge and scrambling up the final 100 meters to the summit. We rapidly descended down the Normal route, through the gully that separates Cima Grande from Cima Ovest, then traversed across to the Cassin / Ratti route on Cima Ovest.

We continued climbing in the same manner, slowly and cautiously, both moving at the same time. At the big traverse we looked at each other briefly, took some photos and had a giggle. After a short rest we continued and reached the summit via the direct exit, after having climbed for 2 hours and 45 minutes.

We were out of breath and knew that the best was yet to come. It was mid-afternoon and we tried to descend as fast as possible down the normal route, then traversed southwards to our rucksacks at the base of Cima Piccola. We placed our head torches onto our helmets, but these wouldn’t be needed: although the Innerkofler route on the Kleine Zinne had significantly more snow than the other two steeper routes, it is also significantly easier and therefore we made swift progress. We simul-climbed all the way and reached the third and final summit after 1 hour and 15 minutes. We could hardly believe it: after 5 hours and 54 minutes of pure climbing we reached, in the best conditions but nevertheless in winter, the summit of all three peaks on the same day. We could not have hoped for a better end to 2016, and we wish for a successful and healthy 2017. And not only for us, but to all those who love the mountains ;-)