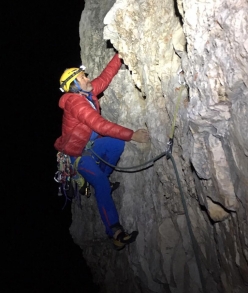 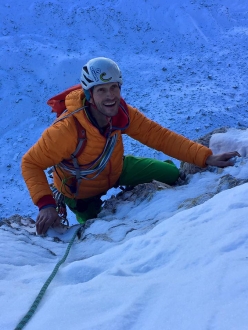 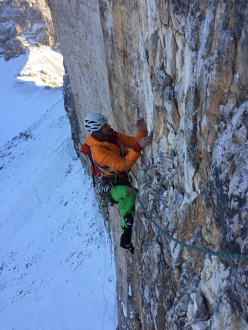 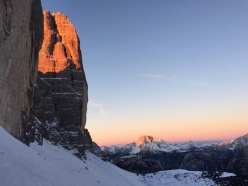 On 23 December 2016 on the Drei Zinnen / Tre Cime di Lavaredo (Dolomites) Simon Kehrer and Christoph Hainz completed a beautiful winter trilogy by climbing Via Comici-Dimai up Cima Grande (in 2:30), Via Cassin up Cima Ovest (in 3:25), and Spigolo Giallo up Cima Piccola (in 1:28). The South Tyrolean alpinists had set off by bicycle from Lake d'Antorno at 7:00am and returned to their starting point by bike at 20:00. The round-trip lasted 13 hours, while the total for the 3 routes was 7 hours and 30 minutes. The report by Simon Kehrer.

I’m now lying in my warm bed and can’t fall asleep. My big toes tingle like mad, they still haven't forgiven me for the previous hardships! But such small, annoying side-effects can’t spoil the joy after such a outstanding day out in the mountains! And what’s more, I now have plenty of time to think about that incredible day of climbing - a true winter’s tale.

A few days ago I called Christoph Hainz about a crazy idea I’d been thinking about for a while. It didn’t take long for me to persuade him, he’s always game for adventure of these sorts, and he was really enthusiastic about my idea of trying something on the Drei Zinnen!

We met before dawn at the turnoff into the Antholzer valley and both agreed our adventure had to begin with the traditional stop-off for coffee at Mama Erna, at the Agip petrol station in Toblach! She gave us her best wishes as well as some of her legendary sandwiches - an early Christmas present. Nothing could stop our adventure now.

After reaching Lake Antorno, we shouldered our rucksacks and warmed our muscles by cycling up our EBikes! We didn’t want to waste any time and so we quickly ascended the snowy and icy road to the col at Patern Sattel. When we got off our bikes we both had to laugh, because our bums hurt like hell and our calves were blue from the cold! Climbers simply aren't bikers and we know full well that we’re better off on some vertical rock face than on a bicycle!

Although it has hardly snowed this winter and there is relatively little snow, we still found ourselves breaking through the crust and wading in the deep snow. Walking up proved tiresome. When we finally reached the foot of Cima Grande we had no desire to continue on to Cima Ovest, where we had originally planned to begin our climbs. We decided to try Via Comici first, and save Via Cassin on Cima Ovest for later! We stashed the gear we’d need for that route, geared up for the Comici and soloed up the starting pedestal.

We cleared snow off the small ledge and tied in. Christoph was full of enthusiasm and made rapid progress. After a mere 2.5 hours we reached the band, where we sank into deep snow. A decent handshake..., joy...! With little time to spare, without hesitation we made our way to the descent. We skipped the view from the summit, we can enjoy it as much as we want when our work as mountain guides takes us up there!

We reached the col between Cima Grande and Cima Ovest, then continued down crusty and slippery snow into the North Gully. We had to take care. Further down we split: Christoph went to the base of Via Cassin, while I scurried back to where we had stashed our gear. Exhausted and a little out of breath I caught up with climbing partner and generously allowed him to take the lead. After 5 pitches I’d recovered sufficiently and felt strong enough to take the lead. As Christoph started across the airy traverse I forced my feet into my climbing shoes and prepared to take the lead. In an moment of over enthusiasm I bolted up the wall and traversed for almost 30 meters, instead of just 10, along the water streaks. The last time I’d climb this route was 15 years ago and I could only vaguely remember the route. Christoph hadn’t repeated the route for ages either, but like a precise car navigator he steered me back on track!

My mistake cost us a few valuable minutes. Annoyed at myself, I rummaged through the band of snow and gave Christoph, who had taken the lead on the next pitch, the wrong directions… (I’d simply misread the topo!). Fortunately it didn’t take too long for him to find the right route again!

On the upper section the terrain became more tricky. Here, where the angle eased off, a lot of snow had accumulated. The rock was smooth and damn slippery, with our climbing shoes on we had to think carefully about every step. We made much slower progress, but nevertheless after 3 hours and 25 minutes we reached the band which leads to the descent down the normal route.

A sensational sunset provided an indescribable scenario and richly rewarded us for our efforts and almost made us forget the cold and hardship. We took a break for a few minutes while we absorbed the warmth of the last rays of sunshine. Our shoes weren’t soaked, they were frozen! Being able to tackle the descent in daylight gave us a boost and suddenly we reckoned perhaps we would be able to climb all three routes in a day. We quickly took some photos, stepped into our cold shoes and hurried down the snowy normal route directly towards Cima Piccola.

After almost exactly an hour we changed our shoes once again, from our lightly thawed approach shoes into our wet climbing shoes. Our feet weren’t particularly enthusiastic about this, but our motivation to finish the project was so strong now that we ignored all discomfort.

After 2 pitches it got dark and while I belayed up Christoph, I put my head torch on my helmet. Romantic headlamps accompanied us now. A headlamp which flickered on and off! I had to shake it again and again, because thanks to my two children, this good old piece of gear has stopped working properly!

After 1 hour and 28 minutes we reached the top of Cima Grande, happy and filled with indescribable joy Grateful for this successful climbing day and overcome with a sense of inner satisfaction we looked out into the starry sky and listened, almost reverently, to the stillness of the night. In the distance the lights of Auronzo glittered

Even our completely frozen shoes couldn’t dampen our happiness, so we squeezed our feet back into them and somewhat clumsily made our way, with utmost concentration, to the abseil piste. After an hour we reached solid groundagain and our EBikes brought us back to our starting point at the Lago d'Antorno, where we had set off 13 hours earlier.

All we wanted to do now was race home because we knew that Gerda, Christoph's partner, was waiting for us with a pair of warm socks, a bottle of Prosecco and a huge portion of pasta and peperoncino!

... as you can see, with sufficient speed and power one can combine family and mountaineering quite well ;-)
... and in addition, after climbs like these you can celebrate and enjoy the demanding Christmas season!