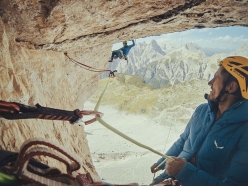 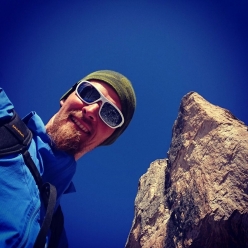 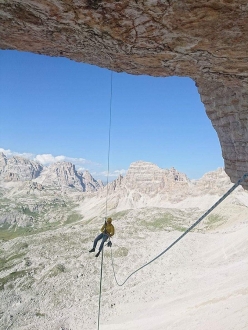 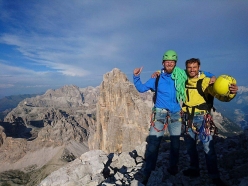 On Wednesday 2 August 2017 the Poles Jacek Matuszek and Łukasz Dudek repeated Project fear, the difficult route up the North Face of Cima Ovest di Lavaredo in the Dolomites. Established in 2014 by Scotland’s Dave MacLeod, the route follows the aid route established in 1968 by Gerhard Bauer, Erich Rudolph and Walter Rudolph then climbs 130 meters of new terrain before joining the crux pitch of Pan Aroma (Alexander Huber, 2007) and continuing to the summit via the classic Cassin route.

In 2015 Scotland’s Robbie Phillips and Willis Morris made the first repeat of the line and now, after a day's work, the Poles made a free ascent. Both sent the two hardest pitches and, after waiting out a storm, reached the summit at 7 in the evening.

The Poles stated "We chose Project Fear as it offered almost 250 meters of the terrain that was new to us. Going for Pan Aroma would have meant climbing the initial pitches of Bellavista and we have done that already. We were driven by the urge to climb something we had never attempted before. It turned out we’d made the right decision. Project Fear is the most beautiful route we have ever climbed in the mountains and we are impressed by both Huber’s and MacLeod’s vision, determination and courage. It seems to us that it deserves more the name of Project Perfect Beauty."

In 2016 Matuszek and Dudek made the second ascent of the Spanish route up the North Face of Cima Grande di Lavaredo, and this latest climb joins the others in their so-called Alpine Wall Tour project up some of the most emblematic and difficult rock climbs in the Alps. These include End of Silence in 2013 (X, Berchtesgaden, Thomas Huber 1994) Des Kaisers neue Kleider in 2014 (X+ , Wilder Kaiser, Stefan Glowacz 1994), Brento Centro (8b, David Lama, Jorg Verhoeven, 2010), Silbergeier (X+, Rätikon, Beat Kammerlander 1993) and Bellavista (Tre Cime di Lavaredo 8b+, Dolomites, Alexander Huber, 2001) in 2015.


Project Fear
Grade: 6b+, 6c+, 7a, 6c, 7b+, 8a+, 8c, 6c+, 6c+, 5+, 6a, finish up the Cassin route
Note: All the gear on the pitches are pegs (some good, some bad) apart from one bolt placed on the 7b+ to protect the runout across the nose away from the vertical wall, which would otherwise be very serious, with some fragile holds. The belays on the Bauer – Rudolph route and Pana Aoma have bolts, bolt belays were added to the new pitches.Furthermore, MacLeod recommends not to trust the old drilled pegs on Bauer – Rudolph route as these break.