Jacek Matuszek and Łukasz Dudek at 03:30, at the top of the Spanish route, Cima Grande di Lavaredo, Dolomites
Photo by Alpine Wall Tour 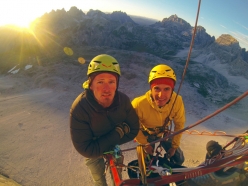 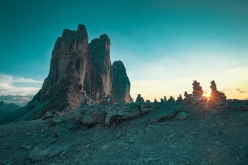 On 31 August 2016 Jacek Matuszek and Łukasz Dudek made the second free ascent of the difficult Spanish Route on Cima Grande di Lavaredo, Dolomites.

At the end of August Polish rock climbers Jacek Matuszek and Łukasz Dudek made the second free ascent of the Spanish Route (8b+, 500 m) up the North Face of Cima Grande di Lavaredo in the Dolomites. This "direttissima" was established as an aid climb in1977 by the Spaniards A. Gallego, M. Lozano, J. Carillo and A. Gomez and in 2003 the route returned to the forefront thanks to Italy’s Mauro ‘Bubu' Bole who, during his incredible vertical "Sturm und Drang" period at the start of the millennium, managed to free climb all pitches up to 8a+ except for one, the roof. The first free ascent was carried out in August 2015 by Austria’s Much Mayr together with Guido Unterwurzacher after numerous attempts, also because the roof was often wet. After the successful first free ascent Mayr suggested difficulties in the region of 8b+/8c.

While Mayr was working the Spanish route Matuszek and Dudek were attempting Bellavista (8b+, 500 m) up nearby Cima Ovest and after their successful repeat the obvious next step was the hardest up Cima Nord. This July the two Poles began working the line but the first impact with the route was "bizarre", as the first pitch was far harder than the stated 6b+. Thankfully the crux wasn’t even harder than Mayr had suggested and after three days of work they made their first redpoint attempt that ground to a halt after the roof due to a storm.

Dudek returned in mid-August with his friend Jarosław Kluf and things ran smoothly on the second attempt, but after the crux pitch he suddenly found himself in deep water: "I expected easy climbing to the top and therefore didn't worry that much about muscle cramps. However, the run-outs started getting longer and longer and I had some serious difficulties finding the leading formations of the route in that sea of rock. We reached the penultimate 6a pitch after sunset. I was standing on the ledge trying to read the route in vain and grabbed a piece of rock above me to climb higher. It was completely loose and I started falling with it and after a massive pendulum I hit the wall with my coccyx. Somehow we managed to abseil to the foot of the wall but after our coming back to Poland I did not believe I would be able to recover fast enough to come back to Tre Cime to make another attempt."

Dudek recovered quickly though and at the end of August he returned with Matuszek. On their first day they recuperated the gear Dudek had abandoned during his hasty retreat a few weeks previously and, importantly, they also added new bolts to the belays they deemed dangerous. The next day they set off for the redpoint: Dudek sent the crux first go, Matuszek on his third. Swinging leads, the duo then continued upwards. Reaching the top in daylight proved out of the question and although they had a sleeping bag, they decided to continue guided by the lights of their head torches. Once again route finding on the loose upper pitches proved difficult but at 03:30 they finally reached the summit.

With this success the Poles have added another chapter to their so-called Alpine Wall Tour up some of the most emblematic and difficult rock climbs in the Alps. These include End of Silence in 2013 (X, Berchtesgaden, Thomas Huber 1994) Des Kaisers neue Kleider in 2014 (X+ , Wilder Kaiser, Stefan Glowacz 1994), Brento Centro (8b, David Lama, Jorg Verhoeven, 2010), Silbergeier (X+, Rätikon, Beat Kammerlander 1993) and Bellavista (Tre Cime di Lavaredo 8b+, Dolomites, Alexander Huber, 2001) in 2015.