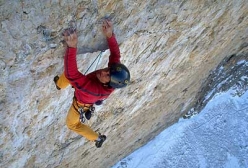 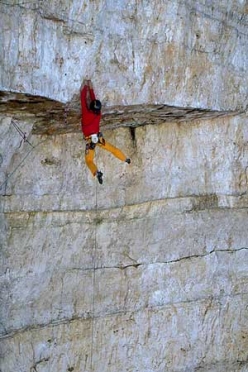 At the start of October on the North Face of Cima Grande di Lavaredo (2999m) in the Dolomites Mauro Bubu Bole made the first repeat of the 1977 Spanish route, grading it 8a+ with three points of A0 aid.

Same style, same north face for Mauro Bubu Bole, who at the start of October completed another of his projects on the immense Cima Grande di Lavaredo. This time he climbed the historic Spanish aid route, put up by the Gallego brothers together with Lozano, Carillo and Gomez, way back in 1977 and graded VI A3.

After 26 years the 450m route had still not been repeated... and so this summer Bole worked the (somewhat friable) line, re-equipping the pitches with pegs and adding bolt belays in the hope of making the coveted first free ascent. Things went according to plan up to the great roof, where Bole tore off an enormous flake, resulting in an 8a+ with three points of aid (AO).

As Bole himself states: "I feel that something is missing in my ascent. Those pull ups on the pegs interrupt the natural flow, perhaps more morally than physically, but the rock is as it is, you have to be able to accept defeat, and never say never. Perhaps one day someone will manage to free it completely."

The Spanish route brings Bole's tally to four hard ascents on the Tre Cime: the 1999 FFA of the Couzy , 8b, the FFA of the "Camillotto Pellesier", 8b and the first repeat of Bellavista, 8c. Bole feels the time is ripe to move on... but knowing Bubu, this "love affair" will no doubt continue.