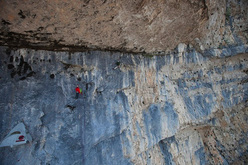 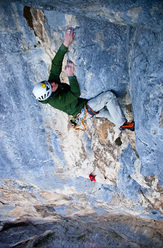 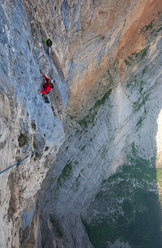 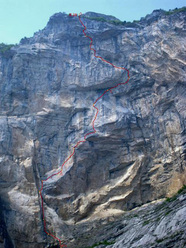 David Lama from Austria and Jorg Verhoeven from the Netherlands have carried out the first free ascent of their "Brento Centro" 8b on Monte Brento, Valle del Sarca (Arco), Italy.

The last time we reported about them climbing together was in 2008 when in Austria's Zillertal the two sport climbing aces created their Desperation of the Northface, an 800m multi-pitch with difficulties up to 7b. Well, that very same year the two also travelled further south, to the enormous Monte Brento clearly visible from the Valle del Sarca as one drives down towards Arco, intent on forging a new line up the massive wall. The result, which was concluded a few days ago, is interesting to say the least: 600m of climbing up to 8b but also the first free route which breaches the enormous Monte Brento roof.

The new route intersects the masterpieces Universo Giallo, Vertigine and Grande Incubo and according to Lama that first attempt in 2008 didn't go quite according to plans. He wrote: “We were ready for an adventure on this endless, friable face. Nevertheless we seriously underestimated the wall. Initially we wanted to climb the line in two days: on the first day we climbed circa 450m and after a night spent hanging from our harnesses we continued for another 200m. Them we abseiled off and some time went by prior to our next attempt.”

The second attempt took place in late autumn 2009. With two haulbags, circa 70kg of gear and a portaledge the duo managed to reach the large roof on day 2, while day three was spent forging a way to the summit. This was followed by a further five days bouldering out all the crux sections before their free ascent on 25 May this year. Lama explained: “We knew that all the sections were feasible, but the fact that 6 of the 28 pitches were harder than 8a made us sweat. Furthermore, at times the route climbs up very friable rock, a single false step immediately results in a fall.”

But on Tuesday 25 May everything ran smoothly. After the 03.30 wake up call and the 04.00 start, the two needed just an hour to scramble up the 400m pedestal to the start of the route proper. The duo quickly climbed up the first seven pitches which led to the first hard section. Jorg led the pitch clean first go, while the next pitch proved more complicated for Lama, who fell, was lowered to the stance and then sent it second go. The next pitches all ran smoothly up to the portaledge, strategically left in-situ beneath the roof. At this point the two had already send 20 pitches but, as David explains: “From here to the summit there are “only” another 8 pitches, but they're not to be underestimated. The rock is still friable and the climbing is hard: 8b, 8a+, 6a, 7b, 7b, 8a+, 8a+.”

But as we mentioned, the 25th of May was their magic day. Lama and Verhoeven swung leads and managed to climb all the pitches straight off, even the final pitch whose crux moves were checked out briefly by Lama before his final assault. They topped out at 18.45, exhausted and elated, but we're certain they'll be back: they also bolted a variation finish, an 8c+ final pitch which leads directly to the pedestal the base jumpers use to launch themselves down one of the most beautiful free flights in Europe...