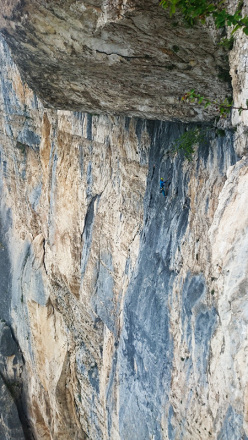 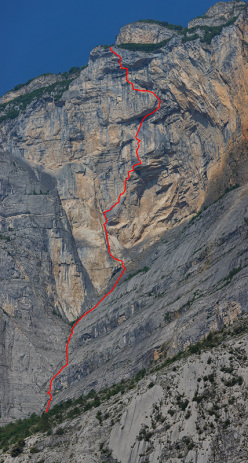 Polish climbers Lukasz Dudek and Jacek Matuszek have made the first repeat of Brento Centro the long, difficult and dangerous route up Monte Brento in Italy’s Valle del Sarca, first climbed in 2009 by David Lama and Jorg Verhoeven and freed by the Austro-Dutch duo a year later. The 28-pitch route is marked by sections of extremely friable rock during the middle section, followed by difficulties up to 8b and a sustained finish with three 8a+ pitches back to back.

Lukasz Dudek and Jacek Matuszek first started working Brento Centro at the start of June and in order to aid progress they hauled a portaledge beneath the huge roof, after the 19th pitch. The initial encounter proved interesting to say the least, as Dudek explains: "The first seven pitches climb grey III-IV slabs and after 400 meters one reaches the proper part of the route. That was where we had to stop for a moment - the fact that Jacek couldn't find any solid holds to begin with made us think. We took a look at our topo and we noticed that there were places marked as 'extremely loose rock' but the pitch in front of us wasn't one of them. Additionally, we started recalling David Lama's words that the higher they got with Jorg the worse the quality of rock was. It all made us stop and consider our options, we were not sure whether we wanted to climb any further. But we did. A few pitches higher we got the first opportunity to tackle the extremely scary terrain. Seeing the rock in front us, there was only one word that came to our minds: madness. Most of the holds we grabbed remained in our hands and only some of them were solid enough. We could only hope they would withstand another attempt."

Fortunately for the Poles the rock held and they then committed to the upper section above the portaledge, another 8 demanding pitches that include bouldery sequences, continuous endurance climbing in a horizontal crack, traversing, roofs, dihedrals, slabs and extremely loose rocks often with long runouts.

After resting for three weeks, at 5.00 am on the 28th of June Dudek and Matuszek set off to repeat the route. Climbing the loose lower section in the sun proved taxing to say the least, but despite falling rock they reached the portaledge at 8.30 pm.

The next morning they set off late, at 10:30, and Dudek reports "We set off at 10.30. For his breakfast, Jacek had to tackle the 8b pitch. He warmed up trying the initial boulder and sent the line on his second go. It all got tough on the following 8a+ pitch climbing the dihedral, which was literally falling apart, and ending with a powerful boulder. It took me two tries to send it. We made the next three pitches on our first attempts but often on the verge of falling off. The last three 8a+'s, being simultaneously the last pitches of the route, are crucial. We quickly worked out the optimal beta for the first one and, surprisingly, sent it quite easily." The two summited without further difficulties at 7.20 pm on 29 June 29.

Brento Centro forms part of the Alpine Wall Tour, a project initiated by Dudek and Matuszek in summer 2013 that climbs some of the most emblematic cutting-edge routes in the Alps. The project is comprised of the three famous 1994 testpieces that form the Alpine Trilogy, namely End of Silence (X+ , Berchtesgaden Alps, Thomas Huber), Des Kaisers neue Kleider (X+ , Wilder Kaiser, Stefan Glowacz) and Silbergeier (X+, Rätikon, Beat Kammerlander), and apart from Brento Centro also includes Pan Aroma (8c, 500 m, Tre Cime di Lavaredo, Dolomites, Alexander Huber). So far the duo have climbed End of Silence (2013), Des Kaisers neue Kleider (2014) and Brento Centro (2015) and they are now preparing for the final two: and Silbergeier and Panaroma.

Progress can be followed on facebook.com/alpinewalltour2015