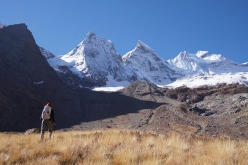 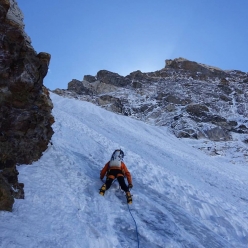 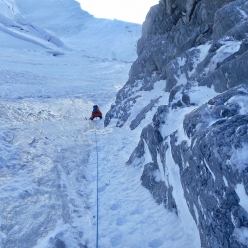 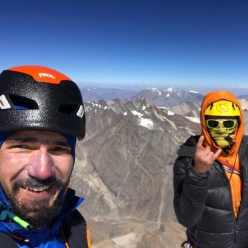 Tino Villanueva and Alan Rousseau on the summit of Rungofarka 6495 m, Himalaya. The two American mountain guides made the first ascent of the peak alpine style over five days in autumn 2017
Photo by Tino Villanueva, Alan Rousseau

Climbing alpine style over five days, American alpinists Tino Villanueva and Alan Rousseau have made the first ascent of Rungofarka 6495 m in the Zanskar mountain range in the Indian Himalaya.

According to allavailable information, towards the end of September and beginning of October the American alpinists Tino Villanueva and Alan Rousseau made what is highly likely to be the first ascent of Rungofarka, a difficult 6495 meter high peak in the remote Zanskar massif in the Indian Himalaya.

Having arrived in India towards the start of September, the two established Base Camp at 3900 m and then, when the first short weather window arrived, they made the their first attempt via a direct line up the North Face. They bivouacked below the Bergschrund then climbed to circa 6000 m before descending, exhausted, down into the night.

After four days of rest and with little time at their disposal before having to return home, Villanueva and Rousseau changed plans and opted for the North ridge. They ascended 1000 m and spent the night in their Advanced Base Camp, and the next day climbed nine pitches of AI3 ice to reach a col where the bivouacked for the night, poised for the North Ridge proper.

The next day the two mountain guides managed to climb a mere nine pitches due to the sustained nature of the climbing up to M6, fortunately though Villanueva stumbled across a small cave, hidden behind an ice curtain, big enough for their tent and enabling them to walk around and sleep without being roped up. This fortunate find at 5900 m proved "probably key to our success" being "totally crazy and a welcome respite for the night."

On day 3 Villanueva and Rousseau continued along the ridge, rarely managing to simul-climb and dealing with 20 pitches, through "everything from mixed chimneys to vertical finger cracks to unprotected offwidths." At 19:00 and at circa 6100 m they chopped an exposed ledge, wide enough for only half the tent, and then spent the night taking turns to sleep as best possible.

Dawn broke on day 4 to a beautiful sunrise. The wind had died down and without a cloud in the sky, the Americans pushed on, past the final ice runnel on the headwall which, they hoped, would lead quickly to the summit. Unfortunately this proved to be further then expected and after delicate simul-climbing along the corniced ridge they finally reached the mountain’s highest point. They took the ritual summit photos, then descended not without difficulties down the unknown West Face. The new route an overall grade of VI M6 WI4+ 1200m.