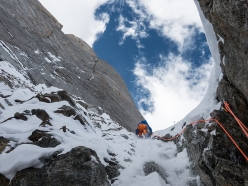 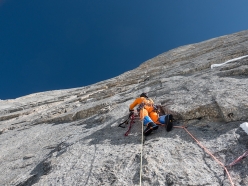 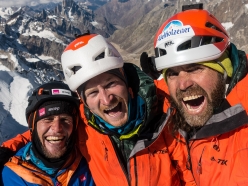 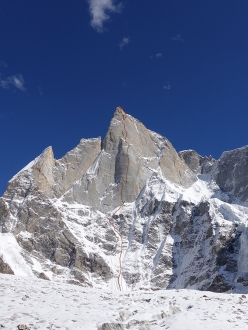 On 14 October 2017 German alpinist Thomas Huber and the Swissmen Stephan Siegrist and Julian Zanker made the first ascent of ‘Har Har Mahadev’, a new climb up the NW Face of Cerro Kishtwar. This is only the 4th ascent of the 6155 m peak located in the Indian Himalaya.

Six years after having made the first ascent of Yoniverse on the extreme righthand side of the NW Face of Cerro Kishtwar with David Lama, Rob Frost and Denis Burdet, this October 44-year-old Swissman Stephan Siegrist returned to Cerro Kishtwar in the Indian Himalaya in order to establish a spectacular new route with 27-year-old Julian Zanker and 50-year-old up the virgin central buttress of the NW Face.

Huber, Siegrist and Zander reached Base Camp on 13 September and iter a few days of bad weather established ABC at 5050m on 18 September. A first attempt failed at circa 1/3 height and the trio returned to BC to reconsider tactics. With renewed energy they set off on their second attempt on 8 October and then needed 7 days to reach the summit on 14 October.

The new route initially climbs 400m of ice and mixed terrain to reach the base of the rock face, from where 600 meters split into 24 pitches lead to the summit. Some ropes were fixed on the lower section and, climbing with a portaledge, 4 camps were established on the wall.

Weather patterns proved remarkably similar during their stay, with clear skies in the morning followed by cloud and then snowfall in the afternoon. Apart from battling against the intense cold down to -20° C, the trio had to deal with technical difficulties up to VII, A3+, 6b, M6, 80°.

The new climb is called Har Har Mahadev and joins the aforementioned Yoniverse, Light before Wisdom established in 2015 by Hayden Kennedy (USA), Urban Novak (SLO), Manu Pellissier (FRA) and Marko Prezelj (SLO), and the original route established in 1993 by Britain’s Mick Fowler and Stephen Sustad. It’s worth pointing out that in 1992 Britain’s Andy Perkins and Brendan Murphy had been forced to turn back 100m short of the summit after having endured 17 days on the mountain.