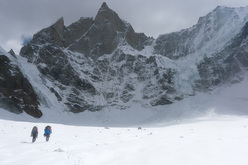 Stefan Siegrist and Rob Frost during the descent. The route Yoniverse takes a the striking line of ice to the right of Cerro Kishtwar summit.
Photo by visualimpact.ch 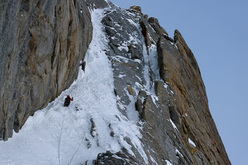 David Lama, Stephan Siegrist, Denis Burdet and Rob Frost have established a new route up the NW Face via their Yoniverse to reach the summit of Cerro Kishtwar (6155m), Himalaya. Siegrist and Burdet then ascended the nearby untouched 6040m peak White Saphire.

At the end of September 2011 an expedition comprised of David Lama, Stephan Siegrist, Denis Burdet, the photographer Rob Frost and filmmaker Stefan Schlumpf carried out two exceptional first ascents in the Kashmir Himalaya, a region which for almost two decades had remained out of bounds for political reasons: the ascent of the magnificent granite tooth Cerro Kishtwar and a nearby 6000er dubbed White Saphire.

The expedition established ABC just above 5000m and Lama, Siegrist, Burdet and Frost set off on 28 September but after Camp 1 on the plateau above the hanging glacier they were forced to abandon this first attempt. They realised that with their haulbag and all the gear they would simply have been to slow to climb the beautiful ice couloir which up to this point had been hidden from view and which led directly to the South Ridge.

After a short rest they set off on 30 September just after 3:00am and the gully proved far more dangerous than expected, with poor, steep ice and long runouts. Nevertheless all four reached the 6155m high South Summit at 13:15. They spent an hour enjoying the splendid views, then descended to Camp 1 where they spent the night, and returned to BC the next evening at 20.00.

This excellent ascent was carried out in lightweight, alpine style and obviously without any bolts. The new route is called Yoniverse and is considered the first ascent of Cerro Kishtwar, seeing that in September 1993 the British alpinists Mick Fowler and Steve Sustad reached the North summit which was measured by Lama, Siegrist, Burdert and Frost as being 5 meters lower.

After this success Stefan Siegrist and Denis Burdet decided to make best use of the spell of good weather to attempt a peak they had seen during the approach and which was poorly indicated on the map. The duo opted for the NNW Face in alpine style and this too proved demanding, but they managed to reach the West summit at 6040m which they called White Saphire and then cross to East summit, 60m lower, before descending safely to BC in a 3 day trip.

Commenting on his site Siegrist stated "Straight out: the Kishtwar adventure was one of my most beautiful expeditions ever. Everything worked perfectly. The team (Denis Burdet, David Lama, Stefan Siegrist, photographer Rob Frost and filmmaker Stefan Schlumpf) was harmonious and we worked well together, the weather was beautiful, we were all on top form and enjoyed good health, the objective was superb, the region totally cut off from the rest of the world, the mountains fascinating. In short: fantastic!" These are words which obviously cannot be taken lightly, especially in view of Siegrist's impressive ascent of Arwa Spire together with Burdet and Thomas Senf in 2007!


UPDATE 02/11/2011
On 30/10/2010 we erroneously reported that in 1993 Fowler and Sustad had reached only the lower North Summit. This is incorrect as the alpinists also climbed the actual summit (South Summit) before descending.