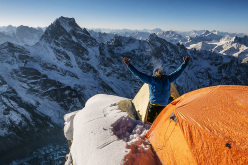 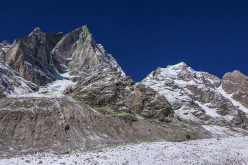 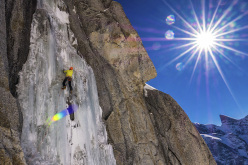 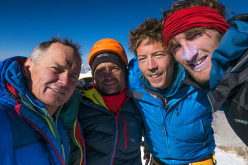 Cerro Kishtwar and Chomochior, new climbs in the Himalaya by Kennedy, Novak, Pellissier and Prezelj

In October 2015 alpinists Hayden Kennedy (USA), Urban Novak (SLO), Manu Pellissier (FRA) and Marko Prezelj (SLO) made the first ascent of the East Face of Cerro Kishtwar (6173m), as well as climbing a new route up the South Ridge of Chomochior (6278m) in Indian Kashmir Himalayas.

Inspired by photos taken a year ago by Slovenia’s Marko Prezelj during the first ascent of North Face of Hagshu in the Indian Himalayas, on 10 October an international team comprised of Prezelj, his fellow countryman Urban Novak, Manu Pellissier from France and Hayden Kennedy from the USA met in Delhi with their sights set on two peaks in the eastern Kishtwar massif: Cerro Kishtwar and Chomochior.

After hiking through the Darlang Nullah valley they established base camp at the mouth of the Chomochior valley at 3900m. Advanced Base Camp was established a three-hour high further up valley and just before the forecast spell of bad weather arrived they managed to examine Chomochior and Cerro Kishtwar close up, noting that there was very little snow and ice on the faces, especially the lower halves which were completely dry. It snowed from 21 - 23 September and the rainwater flooded the campsite, forcing the four to sophisticated system of drains and dams to protect their tents.

On 26 September conditions had improved sufficiently for the four to return to ABC, where they fixed their broken tent before Pellissier returned to BC due to chest pain. The next morning greeted Kennedy, Novak and Prezelj with perfect weather and the trio set off towards the south ridge of Chomochior. Progress was slower that expected as they broke trail through the fresh snow and they excavated a small bivouac site on a broad saddle between Cerro Kishtwar and Chomochior. The next day they followed the ridge, at times past exposed and technically climbing, to make their second bivy at circa 5900m at the end of the snow-covered rocky ridge. The next morning they left their gear behind and reached the 6278m high summit at 11:00 and then quickly abseiled down the eastern slopes to the the lower third of the mountain, from where we descended along the ascent route. The reached ABC that day, and after drying their gear returned to BC the following afternoon. The 1400m line has been graded D+ and is only the second ascent of Chomochior, after Roger Everett and Simon Richardson climbed the west ridge back in 1988, before the area was officially closed to foreigners.

Three days of rest followed before returning to ABC, this time in the company of Pellissier who, after receiving from his chest pain, had climbed two 5000ers together with the guide Bagwal Thakur and the cook’s assistant Bhupender Kumaar Thakur. The four opted for a line up the east face where, although steeper, they expected less fresh snow and more favourable conditions for climbing than on the nearby NE Face.

They set off on 5 October and mainly rock-climbed almost 300 metres of the wall, past difficult terrain and evening snowfall which hampered progress. After digging out a narrow ledge they pitched their two small tents where they spent the first night, the next morning they jugged the two pitches they had fixed the previous evening and then continued past steep and softened ice corroded by sun to a long ramp of hard ice and a long systems of steep corners. Night fell and it was only at two o’clock did they crawl into their sleeping bags on a small ledge dug into the steep snow. Day 3 broke with fine weather and the four climbed continued upwards, traversing diagonally onto the NE Face to avoid some difficult aid. The summit was reached late at night, and while Pellissier and Prezelj set their tents on the summit, Kennedy and Novak set theirs up one meter lower.

The next day the descended via abseil down a couloir on the left part of the east face; due to the three days clear weather conditions on the mountain had changed considerably and the descent was described as being more like canyoning than descending an ice route on a six-thousander, as they only set up one Abalakov anchor during the 1200m descent.

Timing and adaptability to conditions had been key and commenting after the ascent, Novak stated "After a successful descent from the summit, the view on the wall from below revealed very different conditions. We caught the perfect time for climbing, because after we descended, the bottom part of the face had no more ice which had enabled us - in spite of its questionable quality - a successful ascent".

The new route has been called Light before Wisdom and graded ED+ 1200 m (5.11, WI6, M6, A2). The first ascent of the mountain was carried out in 1993 by British alpinists Mick Fowler and Stephen Sustad, while in 2011 David Lama, Stephan Siegrist, Denis Burdet and Rob Frost climbed a new route up the NW Face.