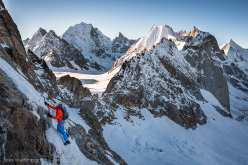 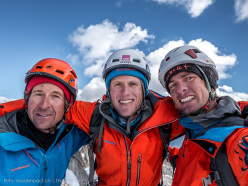 In September 2014 Dres Abegglen, Thomas Senf and Stephan Siegrist made the first ascents of the peaks Shiepra 5885m and Kharagosa 5840m in the Kishtwar region of India's Himalaya. Furthermore, at the start of October the trio climbed a new route up Kishtwar Shivling, making what is believed to be only the mountains second ascent.

The Swiss alpinists Andreas "Dres" Abegglen, Thomas Senf and Stephan Siegrist have had a remarkably successful trip to the Kishtwar region in northern India where they made the first ascents of two hitherto unclimbed, and unnamed, 5000m peaks before making the second ascent of Kishtwar Shivling.

The trio left Switzerland at the start of September and reached their Base Camp, not without difficulty due to the terrible weather conditions that pervaded the are, on 13 September. Making up for lost time, they climbed a line up the South Face of the previously unclimbed Shiepra, bivying at 5100m and reaching the 5885m high summit on 16 September after having surpassed difficulties up to WI3, IV, 75° ice. They descended the exposed West Ridge, via a series of abseils and down the 50° ice slope. The new route is called Maaji, meaning mother, while the peak was named Shiepra by Ran Jan, their Liason Officer, after Shiva's wife.

With conditions still looking promising, the trio reorganised and set off to attempt another peak nearby, which they subsequently called Kharagosa, which in Hindi means rabbit, due to its resemblance to this mammal. Siegrist, Senf and Abegglen bivied at 4800m below the NE Face, continued across the glacier to the base of the East Face and then ascended 1000m of tricky mixed terrain. Three demanding UIAA grade V pitches led to the SE face, easier ground and the 5840m high summit, reached on 21 September. The new route is called Pinky, named after the most beautiful woman in the nearby village of Sumcham.

With time still on their hands, the team packed up Base Camp and reached the base of Kishtwar Shivling on 29 September, intent on making the second ascent of this magnificent peak that had been climbed for the first time in 1983 by Britain's Stephen Venables and Dick Renshaw over a seven day period up the North Face. Political tension between Pakistan and India resulted in this area being off-limits for almost two decades, and foreign alpinists have only recently begun to return and explore the area.

Siegrist, Senf and Abegglen climbed a line up the East Pillar, the target of previous expeditions, and made a first bivy on the glacier at 4700m before following a 50° ramp to the col at 5400m. Here they bivied again and then climbed 10 demanding pitches past 90° WI5 ice through a hidden couloir - reminding Siegrist of the famous Super Canaleta on Patagonia's Fitz Roy - and past tricky mixed terrain to below the enormous summit cornices. With "much luck and intuition" the trio stumbled across a hole, crawled through the cornice and reached the 5895m east summit on 1 October 2014. 14 abseils deposited them on the col and their tents, while the next morning they descended back down to the Base Camp. The new route is called Challo, meaning "let's go" in Hindi and marks another remarkable Kishtwar success for Siegrist who, in 2011, made two important first ascents in the same region.

"Per noi", explained Siegrist, "it's not the altitude that's decisive. What's important for us is the beauty of a mountain and an interesting line. What remains is the experience of discovering and climbing mountains hitherto unknown."