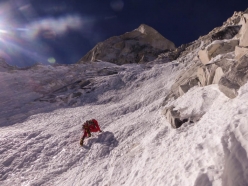 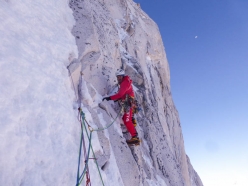 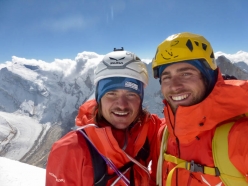 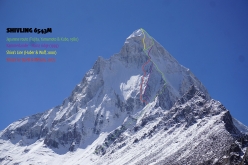 Mountaineering news: in October Simon Gietl and Vittorio Messini made the first ascent of Shiva's Ice, a beautiful new route up Shivling (6543 m) in the Indian Himalayas.

Shivling is without a doubt one of the most striking mountains in the world. First ascended in 1974 via the West Ridge by a Hindu-Tibetan team led by Hukam Singh which included Ang Tharhay, Pemba Tharkay, Laxman Singh and Pasang Sherpa, over the years a handful of difficult routes have been added to this 6543m pyramid. One of these is the North Pillar, climbed by South Tyrol’s Christoph Hainz and Hans Kammerlander in 1993, while Shiva's Line was forged by Germany’s Thomas Huber and Switzerland’s Iwan Wolf in 2000 and recognised the prestigious 10th Piolet d’or the following year.

Italy’s Simon Gietl and Austria’s Vittorio Messini have now established an interesting new route that winds its way up between these two routes to join up with the 1980 Japanese route (Fujita-Kubo-Yamamoto).

Gietl and Messini travelled to the Himalayas at the end of September. Abundant snowfalls in the Garwhal made approaching the mountain hard work, but also resulted in a line of snow and ice to the left of Shiva's Line. After climbing a 50° gully and stashing gear at 5500m, the mountain guides returned to the base camp at 4300m to rest, then over two days they climbed up to 5900m and fixed ropes on the steepest sections before descending to base camp and resting once again.

On 9 October the two left base camp for their summit bid. After spending a night at 5500m they climbed up the fixed ropes and at circa 6000m they joined the North Pillar climbed by Hainz and Kammerlander, where they bivied a second time. The original idea was to climb the steep headwall tackled by Shiva's Line, but due to the biting cold they headed off right and later joined the Japanese route. Shortly after midday on 11 October they reached the summit, then descended via the line of ascent. After spending a third night on the mountain, at 6000m, they descended to base camp the next day. The new route is called Shiva's Ice, is 1500m high in total, deals with difficulties up to WI5, M6, and is similar to the Colton McIntyre route on the Grandes Jorasses, but at 6,000 meters.

Messini told planetmountain.com "Our first plan was to repeat Shiva's Line, but it was too cold and there was too much snow. We then noticed that a line had come into condition to the left and we thought we'd be much faster climbing up this snow and ice than on the snow-covered slabs. We hadn’t even hoped of climbing a new route, it just came about due to conditions we encountered on the mountain."

08.06.2012
Valery Rozov and the B.A.S.E. jump off Shivling in Himalaya
On 25 May 2012 Valery Rozov from Russia made the highest BASE Jump in the world by leaping from 6420m just below the summit of Shivling in the Himalaya.
15.01.2001
Piolet d'Or awarded to Thomas Huber and Iwan Wolf
Thomas Huber and Iwan Wolf awarded prestigious Piolet d'Or 2001 by Montagnes Magazine for Shivas Line on Shivling