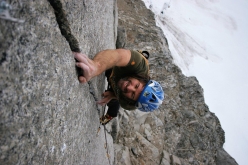 Christoph Hainz climbing Tartaruga (18 tiri 7b+ A2) up Asta Nunaat in Greenland, first ascended in 2006 with 2006 insieme a Andi Fichtner and Roger Schaeli
Photo by archivio Christoph Hainz 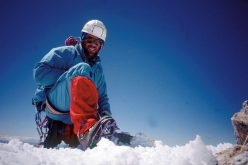 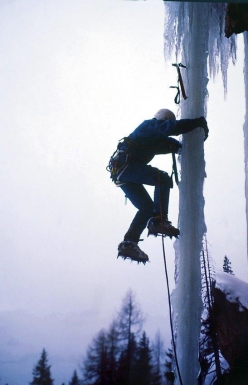 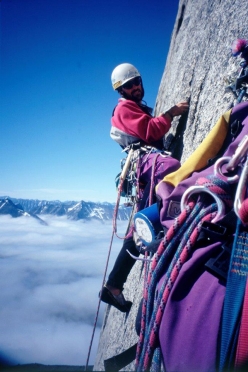 Christoph Hainz in 1996 making the first ascent of Südtiroler Profil on Mt. Ulamertorsuaq in Greenland
Photo by archivio Christoph Hainz

PORTFOLIO / gallery Portfolio: Christoph Hainz, climbing and mountaineering from the Dolomites to the world's biggest walls

Christoph Hainz, climbing and mountaineering from the Dolomites to the world's biggest walls

Interview with South Tyrolean mountain guide Christoph Hainz, one of the world's most talented alpinists and climbers.

Christoph Hainz, you’ve been climbing for the last 35 years, you started when you were 20. What have you learnt?
I’ve learnt a lot, and every mistake has taught me something. I have to admit that the first 5 years were the most dangerous. I could have died on two or three occasions. I also fell 45 meters off Pisciadù once: the rope stopped me 3 meters from the ground. Had that last peg not been there, then my adventures would have ended even before they began.

So how do you avoid thunderstorms in the mountains?
You have to make the right choice, choose the correct route, the right length, the right mountain. You always have to look at the weather forecasts, not rely on just one forecast. Nobody knows exactly when a thunderstorm will arrive, so you have to set off early or try and climb quickly. This is the first rule. The other is the choice of gear: what you need for a classic route, or a difficult route, for a traditional or modern climb, always varies ... and you always have to have the suitable equipment for what you want get up to in the mountains. You have to have the right rucksack in order to be fast, because a heavy rucksack will tire you out and slow you down. For me speed is synonymous with safety in the mountains. Perhaps not always, but often.

When was the first time you asked yourself: am I a mountaineer?
When I first climbed the North Face of the Eiger via the Heckmair route, with one bivouac back in 1989. We didn’t know much about the conditions, our progress was slow and so we bivouacked above the Spider. It was really cold and we only had one sleeping bag for the two of us, we used our ropes as a sleeping mat and had practically nothing to eat, since we’d thought "We can climb the Eiger in a day, it's not such a huge undertaking...". Fortunately it didn’t get even colder and we didn’t get hurt, otherwise things could have turned out very different indeed. We topped out the next day…

So when did you realise you were a good mountaineer?
I realised I was a good mountaineer when I was 45, 50 even, thinking back to the routes I’d put up in the 1990’s that haven’t been repeated yet. Now, with hindsight, I can say that I was a pretty good climber back then, otherwise I wouldn’t have survived.

What routes are you referring to? Can you give us some examples?
Hexenbeisser up Cima Dodici. Zauberlehrling (Apprendista Stregone) up Cima Scotoni. Kein Rest von Sehnsucht up Punta Tissi (Civetta). I made the first ascent of all these routes with various different partners and they’re repeated very rarely indeed.

Why do you think they hardly ever get repeated?
Because they are dangerous... it's as simple as that.

Is the Hexenbeisser route on Cima Dodici still unrepeated?
Yes, I can still remember when we told the hut warden that we were planning on climbing a new route up the North Face. He immediately told his friends in the local Val Pusteria dialect: "They’ll return immediately." But we didn't. We made one bivouac (in a home-made tent) and the next day we resumed climbing and reached the top. That same evening, I still remember it like it was yesterday, there was an incredible thunderstorm ... If we had started a day later I wouldn’t be here to tell you this story. That’s what the mountains are like.

Was it worth taking all those risks?
I reckon I risk a lot less now, this needs to be said ... but I still like to climb hard.

What has being a Mountain Guide taught you?
I take to the mountains in two different ways. The first as an extreme mountaineer and the second as a Mountain Guide. These are two approaches that have nothing to do with each other, or rather, they have very little in common. Because as a mountain guide you have to take care of your clients and their safety, you have to risk as little as possible and logically you cannot be very fast. Often you have to calculate the safety margin far more carefully than you would with a friend or climbing partner who’s as good as you. These two approaches are very different from one another.

Shivling North Pillar, the new route you established with Hans Kammerlander in 1993. What can you remember about this?
It's a climb that represents me a lot. We were a very good partnership because Hans had a huge high altitude experience and I was very good at rock climbing. At one point we discussed things a bit, Hans wanted us to place a pressure bolt, I said no. To be honest we took enormous risks. And you know, if something happens on a face like that one, no one will come and help you. There’s no doubt in my mind that we continued upwards because I said to myself: Hans is the "oldie" with lots of Himalayan experience under his belt. While he thought: Christoph is the youngster, he’s a strong climber and if he says we don’t need to bail, then we’ll continue forging ahead. So without saying anything to each other we continued on to the top.

How come you didn’t continue climbing in the Himalaya, with the 8000ers?
After that expedition I could certainly have continued, but I wasn’t interested in the Himalayas. We have extremely beautiful mountains over here, like my backyard Dolomites. You’re at home and can climb walls that are a thousand meters high, some even higher. We’ve got everything we could ever wish for. Those who want to climb in the Himalaya and do so, do the right thing. But I’ve alway been more attracted to virgin rock faces, such as Ulamertorsuaq in Greenland where in 1996 I made the first ascent of Südtiroler Profil. It’s a completely different ballgame.

Has mountaineering changed now?
I think it’s changed a lot. There are so many different disciplines now and it has to be said that in order to become famous, young climbers (who are all extremely strong) no longer need to climb the toughest routes up the North Face of Cime Grande of the Tre Cime di Lavaredo in the Dolomites, or Mont Blanc for that matter. They can even become famous by simply sport climbing or even by just climbing indoors.

You told us about your first time on the North Face of the Eiger in 1989. In 2003 you carried out a record ascent up that same North face of the Eiger, in just 4 and a half hours... which of the two do you prefer?
Actually if I I have to choose a climb up the Eiger then the most beautiful is Magic Mushroom, the new route I established with Roger Schäli, because it really is a beautiful climb: the rock is excellent and I really love the line that leads straight up onto that fantastic rock mushroom. The classic Heckmair route is something different, there you have to be more of a mountaineer while on Magic Mushroom you have to be more of a climber. They’re two very different things.

Do you like today’s mountaineering?
Mountaineering always follows its own paths. What I feel I can say is that nowadays youngsters don’t wish to take risks as big as the ones we did, instead they want to climb really hard with a bigger safety margin. And this is great because alpinism needs to move with the times, it needs to move forward. Obviously youngsters have to be better than those who preceeded them, otherwise we're all doing something wrong!


CHRISTOPH HAINZ AT ARCO DI TRENTO, ITALY ON 2 JUNE 2017
On Friday 2 June 2017 at 21:00 at Caffé Trentino in Arco an evening talk with Christoph Hainz entitled Born to Climb. The evening will be hosted by Vinicio Stefanello editor of PlanetMountain.com
Info: hainzintour.salewa.com and www.salewa.com

29.05.2017
Christoph Hainz, Tre Cime di Lavaredo man: the evening at Arco
On Friday 2 June 2017 at 21:00 at Caffé Trentino in Arco an evening talk with Christoph Hainz, for the last two decades one of the leading climbers and mountaineers, not only in the Dolomites. The evening will be hosted by Vinicio Stefanello, editor of PlanetMountain.com