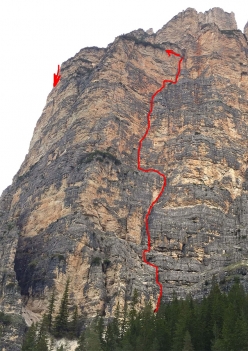 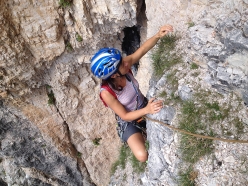 On the South Face of Sass dai Tamersc Christoph Hainz has reequipped Der Fluch der Kamine (VII-, 390m). According to mountain guide from the South Tyrol this climb 'has the potential to become a classic rock climb' in the Italian Dolomites.

During summer 2015 Christoph Hainz cleaned and reequipped Der Fluch der Kamine, a logical route up the South Face of Sass dai Tamersc in the Fanis group o fthe Italian Dolomites, first ascended in the 1950's by Erich Kastlunger and Bottari and also referred to as La maledizione dei camini in Italian.

Hainz had noticed these 18 pitches up to VII- in 2011 while making the first ascent of Gratta e Vinci immediately to the left with Simon Kehrer. Now the route has been "woken from hibernation" and, thanks to its bolted belays, south facing aspect and short approach, has "the potential to become a classic rock climb" in the Dolomites.